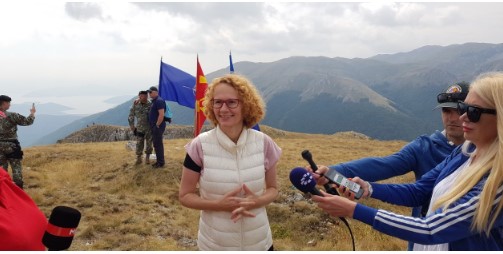 Defense Minister Radmila Sekerinska made another exceptionally reckless comment on the vaccine crisis. As Macedonia is among the last countries in Europe left without any meaningful quantity of vaccines, Sekerinska initially claimed that the Government could’ve procured a large quantity of vaccines early in the crisis, but didn’t do it because it would have set off alarm bells in the suspicious public.

Trying to come up with an excuse for the lack of vaccines, Minister Sekerinska toys with anti-vaxxer sentiments

And now, after the Western manufacturers ignored Macedonia’s orders and faced with serious difficulty in purchasing even Chinese vaccines, Sekerinska made another gaffe. The latest problem the Government is facing is the revelation made by the opposition VMRO-DPMNE party that the Chinese Sinopharm manufacturer returned the advance payment that was made for the expected 200,000 vaccines. After the opposition revealed the problem, the Healthcare Ministry confirmed that there are some problems with the order.

Speaking to the press, Sekerinska attempted to spin the event as a positive for the Government, saying that it was transparent to reveal the problem, and didn’t try to hide it from the public.

We could’ve decided not to inform you and that would have meant less questions for us, but that is not how we operate. We come out in front with our problems, Sekerinska said.

Setting aside the fact that the problem was not revealed by the Government but by the main opposition party, it seems that Sekerinska actually expected gratitude from the public for not lying to it. Healthcare Minister Venko Filipce has already burnt the remaining credibility he has in the public after he insisted that the Sinopharm vaccines will arrive by the end of February, and his frequent promises that the vaccines will arrive in January, then at various dates in February, are played on a loop by the TV stations as exasperated patients and citizens await for the vaccines that offer a chance for return to normalcy. But now it is Sekerinska’s latest gaffe that is going viral.