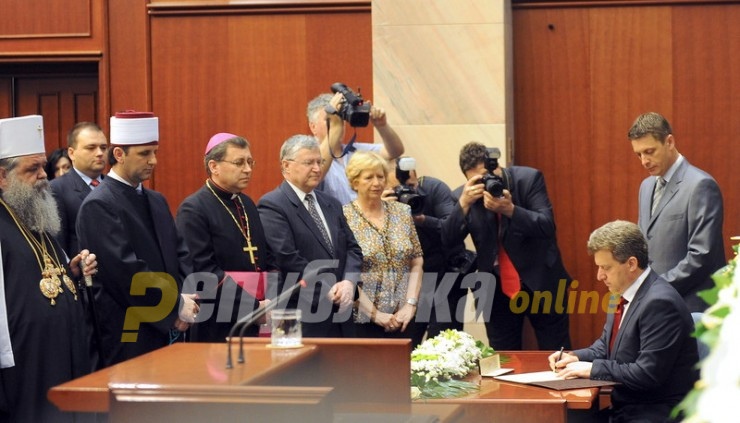 After Prime Minister Zoran Zaev said that he doesn’t expect President Gjorge Ivanov to pardon the victims of his campaign of political persecution, legal experts respond that the President has every right and has the authority to give pardons. The Office of the President confirmed that a request to give end-of-term pardons has been received, primarily to the victims of the April 2017 trial, which was abused to blackmail members of Parliament and force them to vote to rename the country, and after a selective pardon a number of political activists remained sentenced to lengthy prison terms as “terrorists”.

The President can give pardons like he did before. In this case, the Amnesty law was applied unevenly, and that was done because of partisan interests. President Ivanov says that he supports equal application of the laws and the Constitution and now he has the chance to prove it, says lawyer Zvonko Davidovik.

Justice Minister Renata Deskoska announced that her department would slow-roll any attempt by the President to pardon the political prisoners, which include former Interior Minister Mitko Cavkov and Jane Cento, political activist and heir to the distinguished Cento family name.

But, criminal law professor Gordan Kalajdziev says that President Ivanov has the right to issue pardons without involving the Justice Ministry. This prerogative was temporarily taken away from the President with the 2016 changes to the law on pardons, but was later restored when the Constitutional Court struck down the changes.

President Ivanov’s inactivity as his term draws near has also raised questions whether he, like the members of Parliament before him, is facing threats and some form of blackmail, which would not be surprising given the campaign of political persecution in Macedonia. The President has until May 12th, when his second and last term in office expires, to make the move.