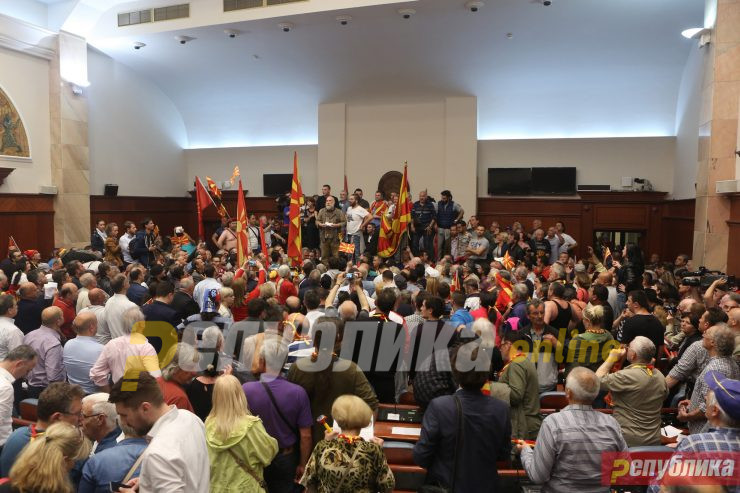 VMRO-DPMNE leader Hristijan Mickoski painted a dire picture of the rule of law in Macedonia, as the courts, pressured by the Government, rush to absolve Prime Minister Zoran Zaev from well documented corruption charges, while at the same time take part in all out persecution of the opposition.

Perhaps one of the main reasons that led VMRO to support a distinguished law professor and a proven fighter for justice as its presidential candidate is the fact that the rule of law issues are now at the heart of politics. How can you persuade me that we have rule of law and justice when, on the first day of the electoral campaign, the Appeals Court hands a not-guilty verdict to Prime Minister Zaev, in a case where the whole country saw him, on video, asking for a bribe?, Mickoski said during his interview with TV21.

Unprecedented: Prosecutors undermined their own case, asked the court to release Zaev from charges of corruption

Meanwhile, Mickoski said, there is no certainty that some of the main political victims of Zaev’s persecution will be freed soon, even as President Gjorge Ivanov has received a request to pardon the 16 political prisoners from the April 2017 trial and has until May 12th to do so.

I’m not in talks with Ivanov and I don’t know what he intends to do. The sentences totaling two and a half centuries in prison are draconian. I do not condone violence and let them he be held responsible for violent acts. But this is not serious. With each passing day the citizens see whether they are dealing with a Government of honest politicians or fraudsters. And fraudsters don’t reign for long, Mickoski said.

Regarding the Special Prosecutor’s Office, whose fate is one of the main pre-election issues, between the Zaev Government and VMRO, Mickoski repeated his position that what is needed now is an investigation in the way this deeply partisan institution used the significant funds made available to it.

Let the Parliament see where the SPO spent 15 million EUR. There are indications that the money was abused. But they refuse to allow this. We propose that all prosecutors are equal in their standing and have equal opportunities to work. Also, we have the same position which Zaev had, to allow the opposition to nominate the Public Prosecutor, Mickoski added.