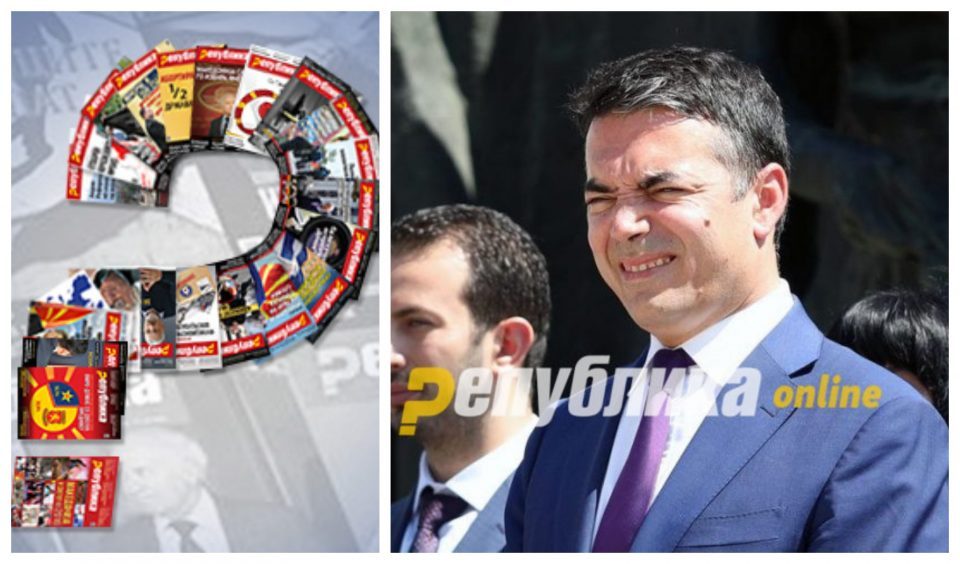 Who knew, but now we all know, “Republika” was the biggest threat to the government at the moment. Not “Racket”, not the persons involved in it, not global warming, not the environmental disaster around us, nor the shining of the Macedonian economy – but the “Republika” news portal.

Foreign Minister Nikola Dimitrov was first to point out that. Around 14h he reprimanded us with a harsh fatherly tone as if we were little children, “to withdraw the news immediately or he would have sued us for the first time in his life”! Us! And the prime minister also joined him in the threat. The “brave and angry” Dimitrov was followed by the angry Defense Minister Radmila Sekerinska. It seems that Boki’s expensive gifts began to squeeze in. Yes, the same one that sent her husband to watch football to Orce Kamcev’s place as she and the “fagot” negotiated his racket. Of course, Frosina Remenski was not left out from the orchestrated witchhunt against “Republika”, and she would sue us as well.

This text, which we are dedicating to Dimitrov, we will start with something very well known to former SDSM General Secretary Aleksandar Kiracovski. We will neither apologize nor withdraw the text. We cannot or do not want to.

Before getting angry and suing Dimitrov, he first has to see that “Republika” is reporting a text published on another news portal, quotes the source, which is citing Orce Kamcev’s testimony to the Prosecutor’s Office, which organized crime prosecutor Vilma Ruskoska confirmed that it is authentic. And there is really nothing we can do here.

And when Dimitrov is already calling for settling the bills, who hurt who, who slandered who, we vividly remember your censorship during the parliamentary elections, and later during the referendum on selling the constitutional name of the Republic of Macedonia and the presidential elections.

Are you aware, Minister Dimitrov, and those around you, a Minister, a MP, the Prime Minister, what message did you send by threatening a medium from the position of Minister? Are you aware of the harm you inflict on the executive in this fragile society in which no one even believes? Are you aware that you have just confirmed that we live in a repressive society, in a system that you in other occasions say it is a regime? Yes, Minister, you know very well with your experience around the world that totalitarian regimes are silencing the media, as now you who are not ashamed of trying to emphasize that you are a representative of that regime. If we were a not serious medium, we wouldn’t be a thorn in your side for years and to try and silence us with repression, physically and financially. You know, well, Minister, what is the influence of Republika on public opinion in the Republic of Macedonia.

And yes, indeed, someone should apologize. You should apologize, you Minister, SDSM, your executive- judicial coupling and your colored revolutionaries, and to us, “Republika”, which you are threatening to sue. We have been subjected to such pressure with the same intensity in the past years, and when you were in opposition. The public in the Republic of Macedonia and the diplomatic missions of foreign countries are informed about the threats, blackmail, lawsuits we have faced, the attacks on our journalists and photographers, the trials in the Macedonian courts and the attempts to discredit Republika’s editors and journalists,  as with the latest threat case, in which a group of activists from the Colored Revolution and NGOs backed by the Open Society Foundation demanded from the court the director of Prva Republika doo. to be sentenced to three months’ imprisonment or one year of probation, over a text published in the Republika weekly magazine in 2016, for which a misdemeanor fine has already been paid. You should apologize to us for the two-year repressions on us as a medium, for the attacked photographer by the security in front of the SDSM headquarters, the death threats and the “dumps” we are sent to by members of the party you serve. Because these cases have never been resolved in court. You should apologize to us for the pressure you exerted through Facebook and Twitter before the referendum, causing our media to suffer great financial damage.

You said you expected propaganda, as we did, Minister, but we did not expect dishonest game and a demonstration of insidious force. But you shut us down. That’s exactly what you did. For your truth is universal to you, like the sun that rises and sets … but no, you have nothing in common with the sun … let it be the darkness that does not get light.

So, wretched Minister, back down, you are not honest at all, and “Republika” does not trample on your honor. You have trampled on it a long time ago. Republika only tells you that the truth is greater than your petty insatiable soul. Tell us, and we’ll ask the same thing in the choir, is there a bigger racket on the media than your orchestrated intention to silence us all? Prove your innocence! You and Radmila Sekerinska, and Zoran Zaev and the Remenski spouses. We will publish that too. Thus, with open threats to the media, we do not play, Minister, nor here in the Republic of Macedonia, an EU aspirant country, nor do those Europeans there, in Europe, which you say you are striving for.

Who was on the right path, time will tell, and until then hold on, we take off.