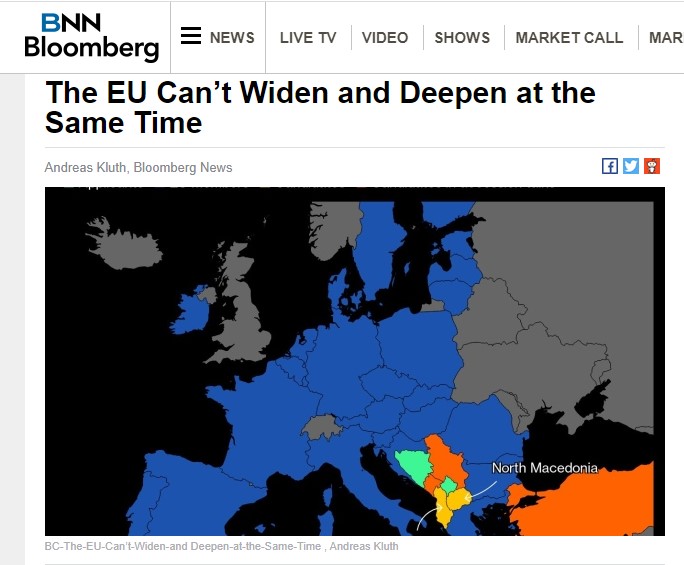 After French President Emmanuel Macron blocked the opening of EU accession talks for Macedonia and Albania, a debate opened about whether the EU can continue to expand while at the same time deepening the integration and decision making. Bloomberg editor Andreas Kluth proposes that this dilemma is resolved with a three tier EU, where countries like Macedonia would be less integrated, while core countries would go ahead and for a joint army, fiscal union…

– Many things divide the 27 member states of the European Union these days, but one controversy in particular sums up the bloc’s fundamental dilemma. It’s over “enlargement,” and specifically whether to formally start accession talks with “North” Macedonia and Albania. Seething below the surface is the question of whether the EU can, in Eurocrat jargon, keep “widening” and “deepening” at the same time. Put differently, if the EU keeps admitting new members, whether they’re ready or not, won’t it just become ungovernable and drift apart? As usual, it fell to French President Emmanuel Macron, who’s earned himself quite a reputation for being undiplomatically honest, to point out this tension. He shocked other EU leaders by blocking formal talks with North Macedonia and also, supported only by Denmark and the Netherlands, Albania. German Chancellor Angela Merkel, among others, was irate; the Balkans were livid. The EU is now scrambling to get him to drop his veto before the European Summit in March. Two main arguments were hurled at Macron. First, that he was being unfair in failing to recognize how much the two countries have already done to become good candidates. Albania has cleaned up its judiciary and cracked down on organized crime. The other country even changed its name (adding “North”), just to appease EU member Greece, which has a region that argued it had dibs on “Macedonia.” The EU had promised that this would be enough to start negotiating, Kluth writes.

He proposes that Macedonia and Albania are allowed to open accession talks, but that the EU will have to fundamentally transform if it is to be relevant opposed to other major global powers.

Each previous round of enlargement thus introduced new fractures into the EU, some between north and south, others between east and west. Macron is hardly alone in observing that European integration stalled long ago, and that “widening” had something to do with that. In foreign and defense policy, any member state can veto any decision, thus assuring European irrelevance and impotence on the world stage. Bigger ideas like a European army are nothing more than pipe dreams. In the euro area, neither banking nor fiscal union has been completed, thus leaving the currency union prone to another crisis. All of this is part of thinking geopolitically. Without a euro to rival the dollar, without diplomats or soldiers that Turkey, Russia, China and others take seriously, what good will the EU be in the long run? On balance, it’s still better to open talks with Tirana and Skopje than to reject them. But the EU must simultaneously confront the bigger dilemma of stalled integration. For that, it has to broach a taboo and talk about a multi-speed Europe. The idea has been around for decades: Letting some groups of countries integrate faster than others in policy areas they choose. Why shouldn’t some members (Germany, Luxembourg and the Netherlands, say) now advance to fiscal union, allowing others to join later? Ditto in foreign, defense and migration policy. If the EU as a whole can’t deepen, let parts of it do so, Kluth proposes.