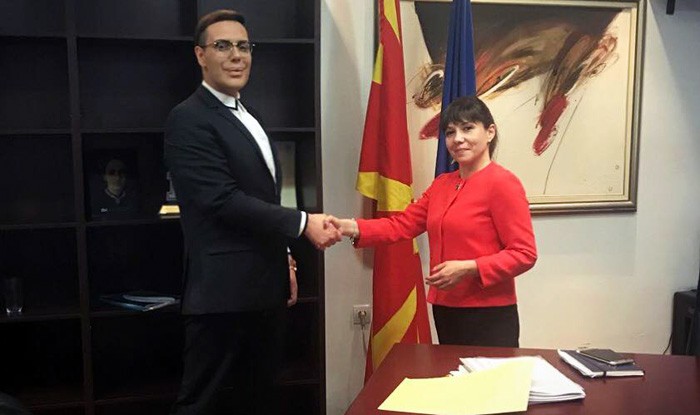 Courthouse drama over the Racket scandal continued today as showman Bojan Jovanovski – Boki 13 was in the dock in the second racketeering trial against him.

The hearing was stopped when his father and co-defendant Mile Jovanovski fell ill and was rushed to a hospital, with the judge postponing the hearing for Thursday. But not before Boki 13 detailed the work of his “charity organization” called the International Association. The charity took money from real-estate developers promising them that it will clue them in in lucrative deals that would be supported by taxpayers’ funds. Over a million EUR were collected from high profile developers from Bitola and Struga under the promise that they will be used to build subsidized retirement homes that would then be turned into villas and sold for profit.

Boki 13 pointed out the high profile support the scheme had, noting that on the day the International Association was formed he was meeting with then Labour and Welfare Minister Mila Carovska. He pointed how former British Ambassador Charles Garrett was an honorary member of the association, as was basketball player Vlatko Ilievski. The honorary President of the Association, former Parliament Deputy Speaker and top SDSM official Frosina Remenski is one of the co-defendants, charged that she used her influence to provide investors for Boki 13.

Prosecutor Vilma Ruskoska, who already secured a lengthy prison sentence against Boki 13 and his friend, disgraced former Special Prosecutor Katica Janeva in the first Racket trial, insisted that this time she has also secured the flow of the money, but she is again not prosecuting top level political officials who were supporting Boki 13, with the exception of Remenski. The bulk of the money in question, which were given by Bitola based businessman Siljan Micevski, were withdrawn from a bank in one swoop, by an elderly woman, which rang all sorts of alarm bells.

I was robbed: Wheelchair bound elderly woman sent by Boki 13 to collect 720.000 EUR says the money were taken from her as soon as she left the bank

Ruskoska said that Boki 13 is a deviant mind who has orchestrated the whole operation. He responded similarly, with personal allegations, saying that Ruskoska’s charges are the product of alcoholism.

Following his initial sentencing, Boki 13 said that the money he is being prosecuted over can be found with Zoran Zaev and his brother Vice. While the second trial is on-going, Boki is also giving testimonies about what he says are numerous crimes that he has witnessed, widely believed to include the Zaev family he was close with at the time and who are suspected of protecting the racketeering – for a share of the profit.