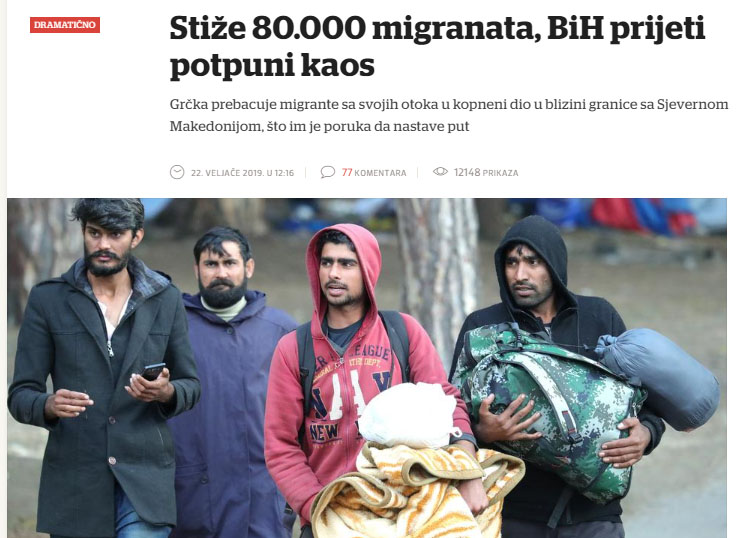 Croatian daily Vecernji List is reporting that the Greek authorities are building two migrant camps on the Macedonian border and that this will likely lead to a new wave along the now mostly dormant Balkan route.

According to the paper, Bosnian authorities have been warned that they should prepare for a new wave of illegal migrants because Greek authorities plan to move the 80.000 migrants now housed on their Aegean islands to the mainland and specifically close to the border with Macedonia. This has proven as a powerful draw for the migrants in the past, who regularly risk crossing the border despite the often difficult terrain, the barbed wire fence and police and military patrols. Once in Macedonia, it is difficult to control the flow further, as most migrants head to Serbia but other routes, including Kosovo and Albania are also available as the Balkans widen northwards.

Two large camps are built next to the Macedonian border. This clearly indicates that a new, even larger wave will head toward the EU, a Bosnian Government source told Vecernji List, warning that countries further north, like Bosnia, are not prepared to control the flow. According to the paper, the European FRONTEX agency has warned Bosnia that they are not ready for what’s coming and that the numbers will likely triple the flow of migrants seen last year.

The numbers would still be far lower than those during the 2015-2016 migrant crisis, when up to 10.000 people would cross from Greece into Macedonia and then further north each day. The crisis ended when Macedonia closed the most trafficked border crossing with Greece near Gevgelija with military units and a barbed wire fence, while Turkey closed its coastline for smugglers who were taking the migrants to the eastern Aegean islands after reaching an agreement with the EU. Since then a left wing Government far more favorable to open borders was installed in Macedonia, while the left wing Government in Greece is also facing growing anger from the citizens of the overcrowded islands in the run up to the general elections.