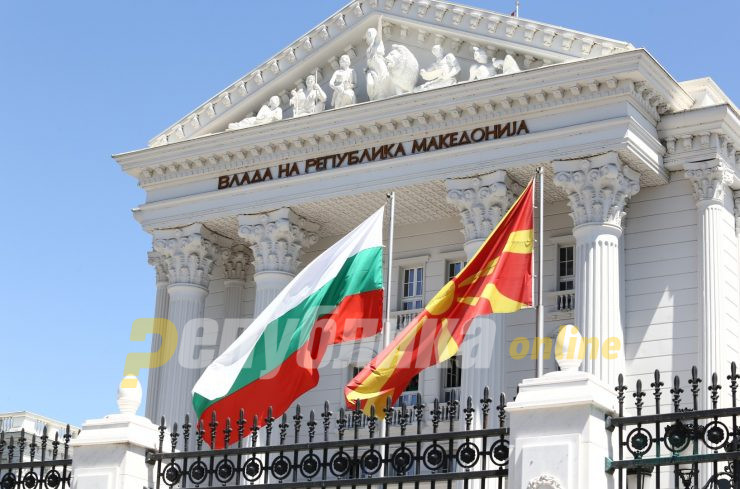 Bulgaria's flag in front of the government building before the signing of the agreement with Bulgaria, August 2018 (photo: Republika)

Bulgarian government approved the protocol of the first meeting of the Joint Intergovernmental Commission between the Republic of Bulgaria and Republic of Macedonia, which was held on June 10 in Sofia.

The government also reviewed the implementation of the Treaty of Friendship, Good Neighborhood and Cooperation signed between the two countries on August 1, 2017, as well as the proposed measures for improving bilateral cooperation in the economy, energy, defense, road infrastructure, tourism, education, culture…

The Joint Intergovernmental Commission, according to the Bulgarian government’s press service, called on the Committee on Historical and Educational Issues, composed of experts from both countries, to speed up work on open topics of shared history such as Goce Delcev and the Ilinden Uprising in order to make progress in accordance with the Treaty of Good Neighborhood, based on objective, established and authentic evidence and historical sources, as well as a scientifically confirmed interpretation of historical events.

Sofia and Skopje have already accepted the agreement of the Commission for Historical and Educational Issues for the joint celebration of St. Cyril and Methodius, St. Clement and Naum and Tsar Samuil, as well as the common principles regarding the content of history books for fifth grade in Bulgaria and for sixth grade in Macedonia.