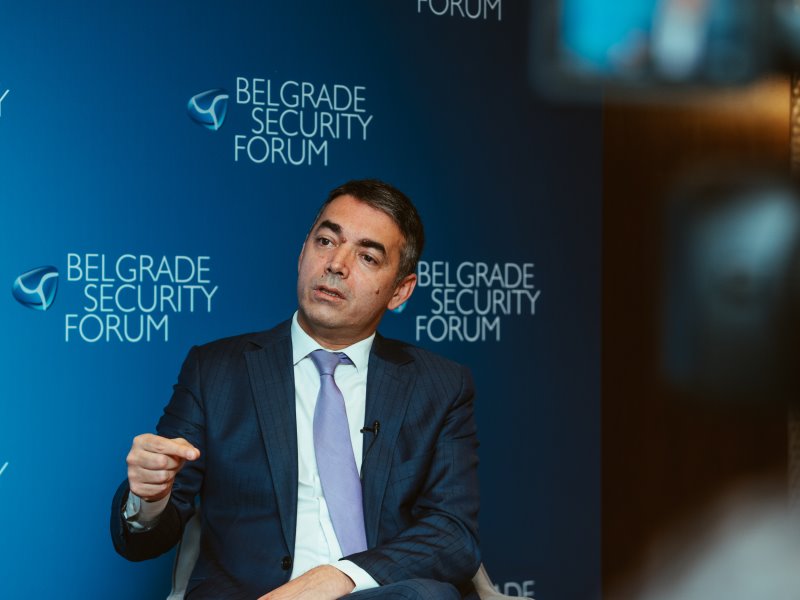 On the sidelines of the Belgrade Security Forum, in an interview with Euronews, Deputy Prime Minister for European Affairs Nikola Dimitrov spoke about EU’s credibility in the region, in light of the European Commission’s latest enlargement package, as well as regional co-operation and its importance in the context of European integration.

Referring to the findings of the latest EC report on Macedonia, Dimitrov said that the lack of action in relation to the recommendations of the Commission reduces the weight of these findings.

Regretfully, the Macedonian path to the EU is maybe the hardest of all. We were among the first ones at the start line, signed the Stabilization and Association Agreement even before Croatia, which has been a Union member for eight years now, while we have not even begun the process, still knocking on the door, says Dimitrov.

In that sense, Dimitrov emphasizes that Bulgaria, by imposing an obstacle on Macedonia, is also blocking EU’s policies in the region.

Bulgaria with its policy and veto in some way compromises the Macedonian-Bulgarian friendship, and vetoes EU’s policy toward the region of which we are part. And I think it really is a time for leadership and responsibility, to think a little about where we want the Balkans to be in 10 years from today, he added.

Asked whether the dispute with Bulgaria could have been prevented, Dimitrov clarified that Macedonia and Bulgaria have signed a Friendship Agreement for that very purpose.

We practically resolved the issue with Bulgaria and signed a Friendship Agreement first with Bulgaria, in order to turn further to Greece to solve the big problem. Article 2 of that Agreement states that Bulgaria will assist us on the EU path. No matter how we interpret the word “assist”, it certainly does not mean blocking and vetoing, and in some way with this policy Bulgaria violates the Agreement on Good Neighborliness, Friendship and Cooperation, both in terms of assistance on the EU path and in terms of non-interference in internal affairs, because the Macedonian identity, the Macedonian language is our business. This is not a matter of a third country, says Dimitrov.

Regarding regional cooperation and Belgrade-Skopje relations, Dimitrov points out that building a common future is a common commitment.

Relations are friendly, we and Serbia have a common past, we were part of the former federation and we want to have a common future in terms of the EU, a common European future. There is much greater understanding now, there are more frequent meetings, visits between the governments of the two countries, he said.