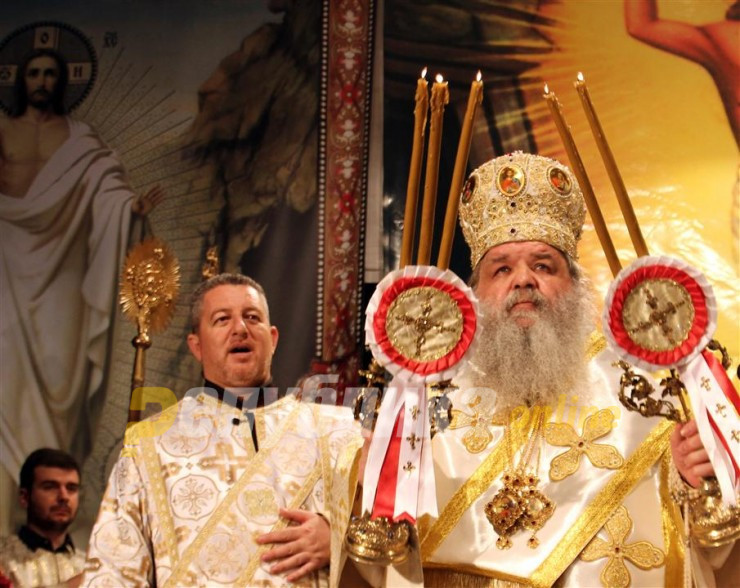 Orthodox believers celebrate Sunday the greatest Christian holiday, Easter – the Resurrection of Christ, the day when Jesus Christ proved his divine power and rose from the dead.

At midnight, the Christ’s resurrection was heralded in all churches of the Macedonian Orthodox Church. 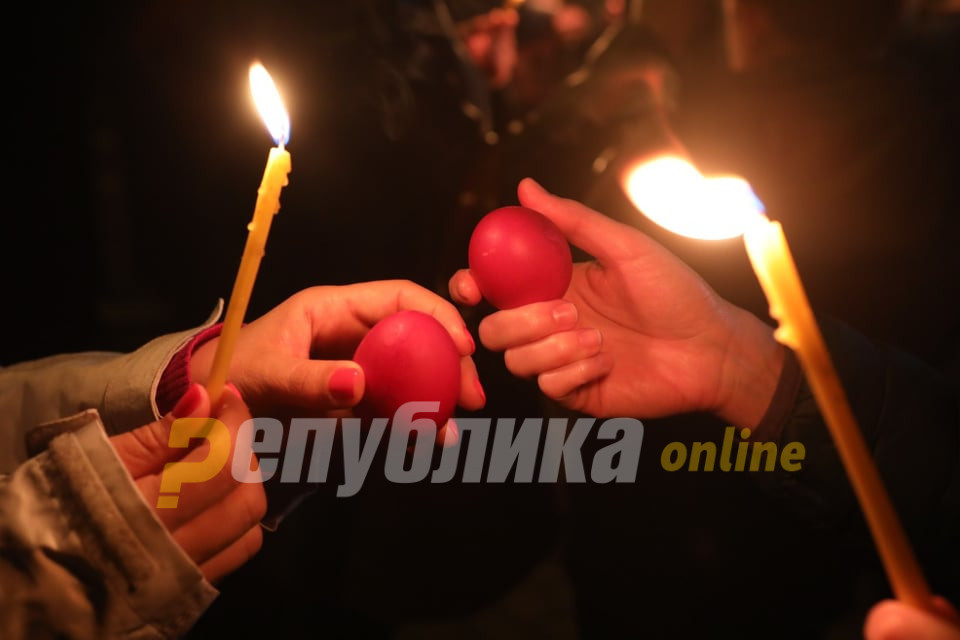 Today Easter liturgies are being held in all churches at home and abroad.

Due to the current COVID-19 crisis and the weekend nationwide lockdown, Easter services will take place without the presence of the faithful in the churches. MOC-OA said prior to the holiday that services will not be interrupted because they represent the identity and essence of its existence, but they would be adapted to the circumstances and protective measures will be observed.

Easter is the culmination of events during Holy Week beginning with Palm Sunday. Palm Sunday reflects the return of Jesus to Jerusalem. Maundy Thursday commemorates the Last Supper of Christ and Good Friday honours the crucifixion of Jesus. Finally, Easter Sunday celebrates the resurrection after his death.

The red colour of the Orthodox Easter egg signifies the blood of Christ, its shell His three-day entombment, and its breaking His Resurrection by which the ‘egg of life’ brought forth a life, up to then unknown.

The red coloured eggs represent the sealed tomb in which the body of our Saviour was placed after His crucifixion. At first the egg is closed and without life, but after several weeks it is broken open and lets the life come out-the little chick. In the same way, the Lord lay in the closed tomb for three days, but then He broke the seal from inside. He who is the Life and Light could not be sealed, and when the time was fulfilled, He came out; in the same way the chick breaks the shell to come out at the proper time. So the eggs at Easter remind us how Christ Himself resurrected from the dead.

Originally only red dye was used to colour the eggs. Red signifies the sacred blood of Christ, which was shed for our salvation. At the time when Jesus rose from the tomb, Mary Magdalene was crying because she thought that someone had stolen the Body of the Lord. Then she saw Him and talked with Him. The Lord told her to go and tell the Apostles of the Resurrection. She ran through the city shouting, “Christ is risen!” On the way she passed someone carrying a basket with eggs, and she said to him, “Christ is risen!” The man answered, “He will rise when these eggs turn red!” Immediately the eggs turned red, and they were amazed.

When Friday dawned, Christ was sent bound from Caiaphas to Pontius Pilate, who was then Governor of Judea. Pilate interrogated Him in many ways, and once and again acknowledged that He was innocent, but to please the Jews, he later passed the sentence of death against Him. After scourging the Lord of all as though He were a runaway slave, he surrendered Him to be crucified.

Thus the Lord Jesus was handed over to the soldiers, was stripped of His garments, was clothed in a purple robe, was crowned with a wreath of thorns, had a reed placed in His hand as though it were a sceptre, was bowed before in mockery, was spat upon, and was buffeted in the face and on the head.

Then they again clothed Him in His own garments and bearing the cross, He came to Golgotha, a place of condemnation, and there, about the third hour, He was crucified between two thieves.

Although both blasphemed Him at the first, the thief at His right hand repented, and said: “Remember me, O Lord, when Thou comest in Thy Kingdom,” to which our Saviour answered, “Today shalt thou be with Me in Paradise.” As He hung upon the Cross, He was blasphemed by those who were passing by, was mocked by the high priests, and by the soldiers was given vinegar to drink mixed with gall. About the ninth hour, He cried out with a loud voice, saying, “It is finished.” And the Lamb of God “Which taketh away the sin of the world” expired on the day when the moon was full, and at the hour when, according to the Law, was slain the Passover lamb, which was established as a type of Him in the time of Moses.

Even lifeless creation mourned the death of the Master, and it trembled and was altered out of fear. Yet, even though the Maker of creation was already dead, they pierced Him in His immaculate side, and forthwith came there out Blood and Water. Finally, at about the setting of the sun, Joseph of Arimathea came with Nicodemus (both of them had been secret disciples of Jesus), and they took down the all-holy Body of the Teacher from the Cross and anointed it with aromatic spices, and wrapped it in a clean linen cloth. When they had buried Him in a new tomb, they rolled a great stone over its entrance.

Such are the dread and saving sufferings of our Lord Jesus Christ commemorated, and in remembrance of them, we have received the apostolic commandment that a fast be observed every Friday.

The custom arose that people hit their eggs against each other to see whose will crack, whose will open like the tomb. One says, “Christ is risen!” and the other answers, “Truly He is risen!”

Out of 2,518 COVID-19 tests carried out in Macedonia in the past 24 hours, 444 new cases were registered, 894 patients have recovered and 21 passed away, the Health Ministry said on Tuesday. The report of the Ministry of Health states that 10 of the registered deaths were from the past three weeks but...
Economy 26.01.21 | 18:05