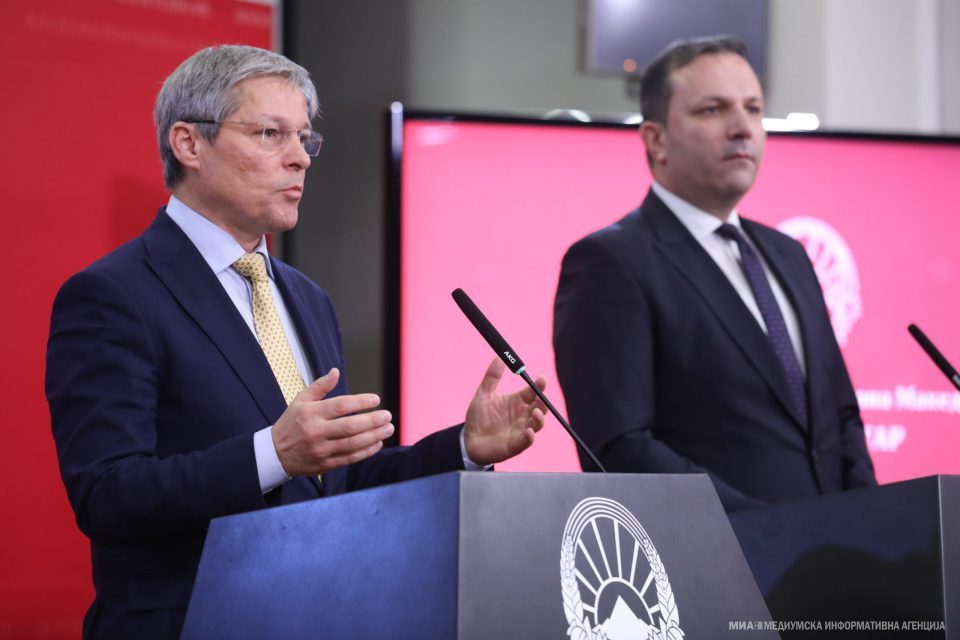 The President of the Renew Europe Group in the European Parliament, Dacian Cioloș, who is visiting Skopje together with EP rapporteur for the country Ilhan Kyuchyuk, said today at a press conference in the government building that the purpose of their visit is to convey a clear message that they support the enlargement process and the fact that Macedonia is ready to start negotiations with the European Union.

Macedonia has fulfilled the criteria set by the EC and its member states and we believe that now all conditions, even political ones, are met to begin the process of negotiations with Macedonia, Cioloș said at a joint press conference with the interim prime minister, Oliver Spasovski.

He suggested that the new enlargement methodology should be used in order to transform this negotiation process not only in an administrative and bureaucratic way of transferring EU law, but, as he said, once the country is ready in certain areas it is important to bring results for its citizens.

We want, as soon as Macedonia is ready in education, agriculture, research, local development and other important chapters, to integrate EU policies step by step, but also to use European funds and European opportunities for development. I am in charge of a political group in the EP that has several heads of state and government in one place, including the French, Dutch, Luxembourg, but also governments like Slovenia, Estonia, the Czech Republic… And we will put our efforts as MEPs to we persuade our colleagues to support this process, said Cioloș.

He underlined that what will happen in the coming weeks and months will be important for the credibility of this process and expressed confidence and optimism that a positive decision will be made in the first half of the year to start the negotiation process.

He emphasized that it is important to maintain good relations with neighbors and prove that Macedonia can respect international and bilateral agreements with its neighbors, because, as he said, this is the first step that will show credibility and with which will ensure good partnership with the EU.

Interim Prime Minister Spasovski, for his part, indicated that through the MEPs he sent a message to all member states to make a positive decision to start EU membership talks, because, as he said, the country has shown political maturity, institutional capacity for serious reforms, even in this pre-election period.

Commitment helps us meet the criteria, reach the standards that allow us to deliver new positive arguments and move us closer to the start of EU negotiations. In this respect, the support we have from the European Parliament and the “Renew Europe” group is very important for us, said Spasovski.