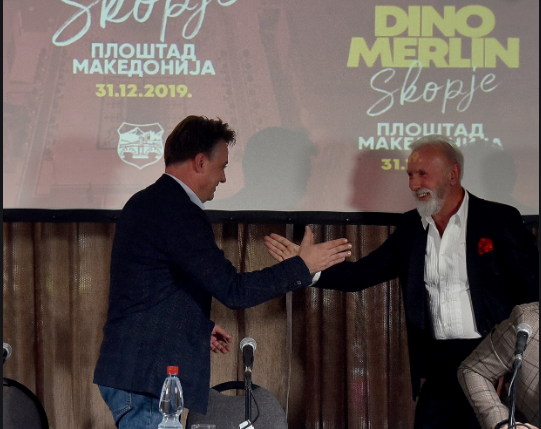 Skopje Mayor Petre Silegov is still not revealing who are the sponsors that will pay 100,000 euros for Dino Merlin’s New Year’s Eve performance in Skopje.

The funds for the music stars performing on New Year’s Eve, both in the past and this year, are funded by sponsors and the City of Skopje does not allocate any additional funds. We as an institution are responsible only for the public funds allocated from our budget and we cannot comment on donor funds, say the City of Skopje.

When Skopje Mayor Petre Silegov announced two months ago that Dino Merlin would perform in Skopje on New Year’s Eve, he also said that the City would pay 0 denars for the engagement, which left everyone in wonder. No one believed that a singer could perform for free, so now Serbian media report that in fact Dino Merlin will be paid as much as 100,000 euros, which is a great deal for a singer like Merlin. It was not until after media outlets in the neighborhood reported on the fee that Silegov decided to address the public via Facebook post. In it, he claims that Dino Merlin’s performance will be paid by sponsors. However, he failed to say who the sponsors of the New Year’s Eve program are.

Actress Jelena Zugic, an adviser from VMRO-DPMNE in the City of Skopje Council, told “Republika” that Mayor Silegov should say who the sponsor of the New Year’s Eve party on the city square is and who is paying for Dino Merlin’s performance. She also expressed suspicion that it is a business deal that will later become a city project.

Who is Silegov’s mysterious sponsor who will pay 100,000 euros for Merlin’s performance in Skopje?