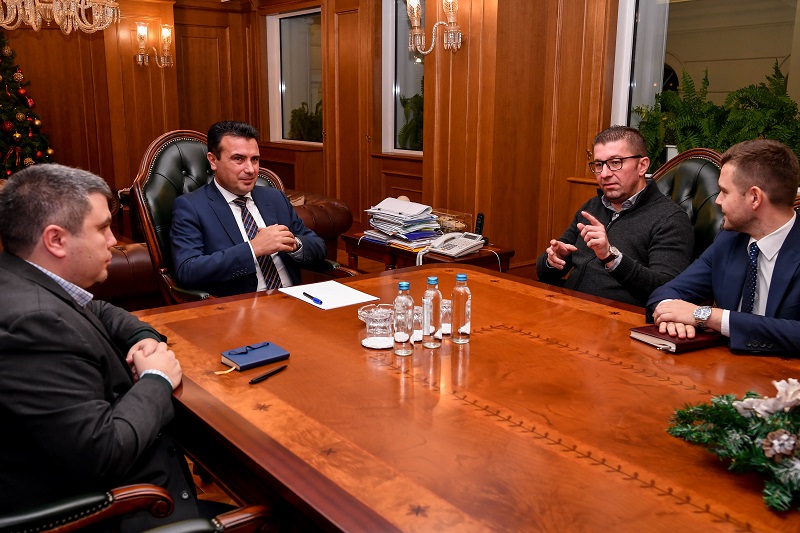 VMRO-DPMNE and SDSM are renewing the bipartisan push to adopt a new law on state prosecutors, following the spectacular implosion of the Special Prosecutor’s Office, which caused huge damage to the reputation and functionality of the judiciary. During his visit to Macedonia this week, EU Enlargement Commissioner Oliver Varhelyi said that the issue should be resolved, as the country hopes that France will lift its veto for Macedonia’s EU accession talks.

SDSM party leader Zoran Zaev today said that he would like to have the law, which requires a two/thirds majority in Parliament, adopted before the Parliament is dissolved on February 11. VMRO responded that they will look into his latest proposals. The main obstacles were the scope of authority the new Special Prosecutor tasked with investigating serious crimes from top level officials would have, with Zaev demanding that his term in office is not covered, and only crimes committed at a future date are examined.

I want the law to be adopted. I believe that we should do all we can. I spoke with the European Commissioner and told him that we in SDSM and our coalition are ready. I asked him to talk to the oppositon. He probably did. This needs to get done, Zaev said, but at the same time insisting that adopting law is not a pre-condition for Macedonia to open EU accession talks.

Given the widespread abuse of the Special Prosecutor’s Office for Zaev’s partisan gains, and the subsequent collapse of the institution after major corruption allegations against Special Prosecutor Katica Janeva were revealed, VMRO demanded that it gets to appoint the next such prosecutor. Zaev controls the broader OJO service of state prosecutors, led by his loyalist Ljubomir Joveski, and he insisted that Janeva keeps her position almost until the day of her arrest. Afterwards, Zaev proposed another of his loyalists, Vilma Ruskoska as the next Special Prosecutor, prompting a break-down in the negotiations with VMRO. Zaev today also raised the possibility that he will look elsewhere for votes, trying to by-pass VMRO and using the group of eight blackmailed former VMRO members of Parliament, but this option is unlikely to work.

We received what is now a fourth proposal for a law on state prosecutors. If would make sense for the ruling majority to withdraw their previous proposal, so we can look into their latest version. It’s clear that Justice Minister Renata Deskoska was wrong when she said that adopting this law is not necessary, and we are at their disposal to reach a broader consensus, said VMRO-DPMNE negotiator on the issue Antonio Milososki.

After Janeva’s arrest in mid August, SDSM had her shut down her SPO office with a series of letters sent from Skopje’s Sutka prison, which ordered that all SPO cases are given to Joveski and his OJO service, which then re-hired most of Janeva’s staff. Although the legality of these letters is widely disputed, SDSM insisted that the switch is lawful and that there is practically no need to adopt a new law on state prosecutors – a position that was rejected by Commissioner Varhelyi earlier this week when he reminded the Government that the law needs to be adopted.

Milososki agreed that there is a possibility to adopt the law by February 11, if SDSM and other parties from the ruling coalition are up to the task, but warned that this latest version again contains an attempt to position Vilma Ruskoska as the next Special Prosecutor. In previous versions, Zaev demanded the right to refuse the opposition’s nominees, and to have Ruskoska appointed to the position if no opposition candidate is approved, which would virtually guarantee that SDSM would block any candidate proposed by VMRO.