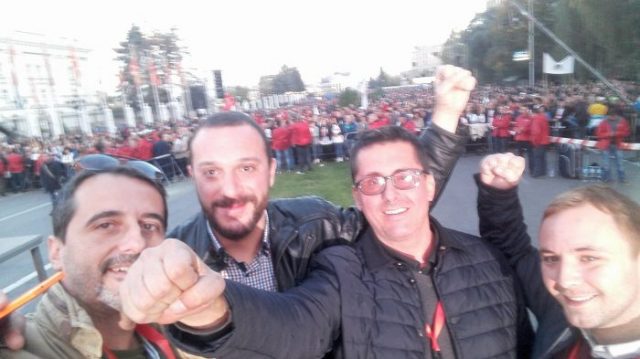 A design company owned by an SDSM party member of the Skpje city council has received contracts from the controversial Innovation Fund worth hundreds of thousands of euros, VMRO-DPMNE said in a press release.

The company is known as Brigada Design and is owned by Bojan Ivanovic, who is an outspoken SDSM party activist, participant it the party’s Colored Revolution and its member in the Skopje city council. Ivanovic is partnered with Jani Makraduli, former SDSM mayoral candidate who was until recently Deputy Environment Minister. Ivanovic’s company has received contracts from the FITR Innovation fund, initially in 2018 for 40,000 EUR in a no-bid procedure, and now a much greater contract worth 200,000 EUR.

Is Ivanovic’s partnership with Makraduli the reason his company is being favored for public contracts? Or is it the fact that he is close to Skopje Mayor Petre Silegov and sits in the Skopje city council?, the opposition party asked.

The Innovation Fund is notorious for giving grants to companies linked to SDSM party officials, often based on thin or even fabricated proposals.

Indian company proves they are the rightful owners of the patent presented by outspoken SDSM party supporter who claimed a grant worth 245.000 EUR

The Fund issued a press release confirming that it gave a major contract to Brigada Design, but insisted that it followed lafwul procedures while awarding the contract.

Company once linked to the Zaev family won a large innovation grant presenting a stolen idea as its own, VMRO reveals

National protest “Ultimatum – no thanks” Macedonia is not for sale!, wrote the leader of VMRO-DPMNE on social networks. The leadership of VMRO-DPMNE, led by Mickoski, also today supported the national protest against the French proposal, which is being held outside the government building. The...
Macedonia 03.07.22 | 18:52