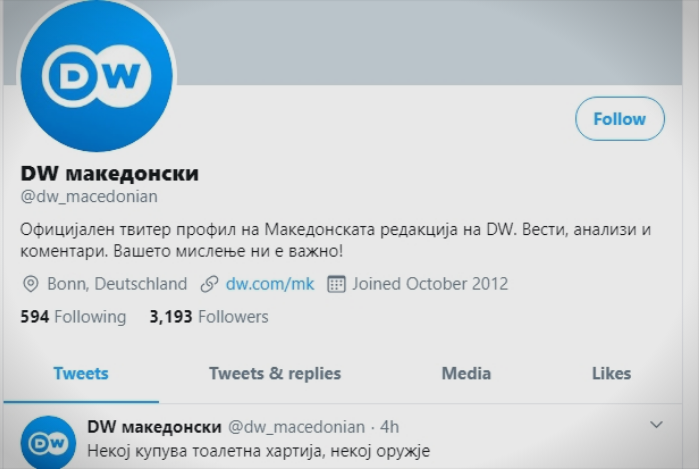 An editorial from the Macedonian office of Deutsche Welle left readers scratching their heads whether the account has been hacked. The angry editorial signed by Ljupco Popovski, that was also shared via the DW Twitter account, politicized the medical assistance that Macedonia received over the past 10 days.

First to deliver aid were Slovenia and Hungary, two Visegrad aligned countries that have close ties to Macedonia’s conservative VMRO-DPMNE party, which is frequently the target of DW’s highly politicized editorials, closely followed by a shipment from Turkey. DW took offense with the fact that the aid deliveries weree widely reported, pointed to the fact that another Visegrad country, the Czech Republic, sent a bigger shipment of aid, and that the EU pledged 66 million EUR in assistance.

Why do the VMRO opinion makers only care about the masks from Slovenia and Hungary, but don’t care about the masks from the Czech Republic, or the 66 million EUR from the EU, or the 1.1 million dollars from the US? Some populists remain the same throughout the crisis, the tweet posted by DW’s official account said. The tweet prompted outrage online, with many readers calling on DW to stop using the epidemic for sowing political divisions and reminding them that they are a German state funded media and their comments can be seen as official German policy.

The donations from Hungary and Slovenia were well received in the public, and VMRO-DPMNE expressed its gratitude to the ruling parties in both countries, who are VMRO’s sister parties through the EPP. But for Popovski and Deutsche Welle, this is populism and even mused whether “the virus will kill populism”.

For good measure, DW also repeated the old allegation against VMRO-DPMNE that the party refuses to give up on 4.7 million EUR that are divided between the political parties, as a cost saving measure. VMRO-DPMNE agreed to this and called on the SDSM led Government to use its emergency powers to adopt a decree and cut the funding, but SDSM refuses to do so and continues to use its affiliated media outlets to promote the fake allegation that VMRO is against the proposal. DW uses this allegation to gaslight over the fact that the Government paid 120.000 EUR to the Macedonian Orthodox Church and the Islamic Community, following a shocking threat from the Islamic Community head that he will re-open the mosques despite the threat of spreading the virus if he is not paid.

VMRO-DPMNE responded to the comment from DW by calling it malicious and tainted with partisanship and asked if SDSM party officials have hacked the DW Twitter account.

DW didn’t ask VMRO-DPMNE for a comment on this article. If it did, we would’ve told them that we welcome any form of assistance sent to Macedonia and that helps Macedonian healthcare workers in the fight agains tthe coronavirus. Medical aid has no political background. It’s possible that the DW Twitter account was hacked by SDSM party structures close to Kosta Petrov, Marjan Zabrcanec or Robert Popovski. If not, we expect an explanation for the article, VMRO-DPMNE said.