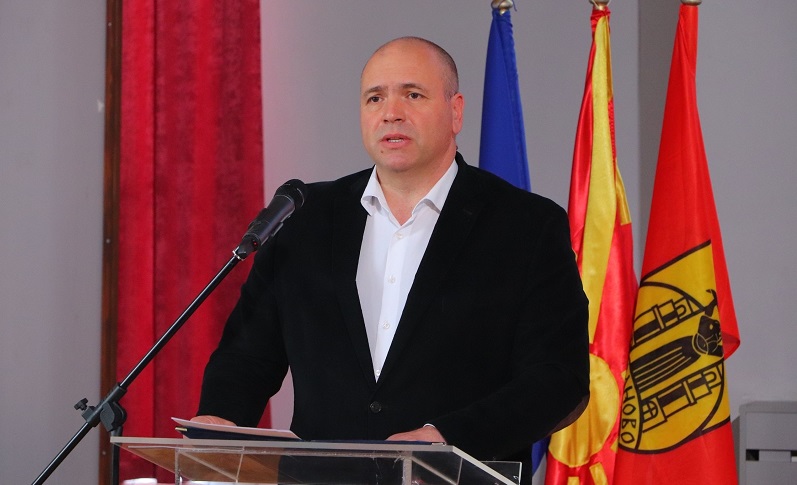 The mayor of Kumanovo, Maksim Dimitrievski, who won a new mayoral mandate as an independent candidate and leader of the “For our Kumanovo” movement, announces that the movement from Kumanovo will spread to all of Macedonia.

Dimitrievski is one of the few political leaders on the political scene who possesses recognizable authority, charisma and has a clear political idea and ideology. He says hat he builds and follows a social democracy, but, in its original sense, ideologically based on Asnom Macedonia and civil equality, something that SDSM gave up after the arrival of Zoran Zaev at the head of the party, when he started applying a trading policy without any other content and purpose, other than making a profit.

Dimitrievski publicly supported the protests against the Bulgarian ultimatum and, in addition, organized protests with such a message in Kumanovo as well, participating in the nationwide resistance against the voluntary renunciation of the Macedonian identity, language, culture and history imposed by the government, thus once again finding himself on the opposite side of that of the current SDSM.

And ahead of Macedonia’s biggest national holiday, Ilinden, Dimitrievski remains true to his state-building social democratic policy, which sees the roots of the modern state in ASNOM, and history, identity and culture through the activities of Macedonian intellectuals, artists, insurgents… in the last two centuries . He confirms this in an interview with Vecer daily.

The Ilinden uprising and the formation of the Krusevo Republic are events of recent Macedonian history that confirm the centuries-old aspiration of the Macedonian people to form their own independent state.

This year, with the acceptance of the French proposal by the current government, and the offered negotiating framework for joining the EU, we will welcome the national holiday Ilinden with a bitter sense of injustice, with lost dignity, humiliated and with an uncertain fate for the further course of the negotiation process and our path to the EU.

A turbulent period is coming for Macedonia, a divided society, a period in which we are facing a struggle for the preservation of Macedonian identity, language, history, culture and protection of Macedonian historical events and personalities. In one word, we must do everything to preserve Macedonian national and state interests, says Dimitirievski in the interview.

Asked what his relationship is and whether he has contact with the leadership of SDSM, after the decision was made to exclude him from the party, Dimitrievski says that formally and legally, he is still a member of SDSM.

The process for my expulsion from the party, in accordance with the SDSM statute, has not been completed. My determination is social democratic, but the politics of the current leadership of SDSM has nothing to do with the basic values of social democracy.

In SDSM, a small political elite rules, which is based on clientelism, personal interest, without a state and national strategy, and the only determination and vision is how to preserve their own positions. In fact, SDSM is not the real government, but is an addition of DUI, which dictates the policies of the government and is, roughly speaking, the BOSS in Macedonia, he said.