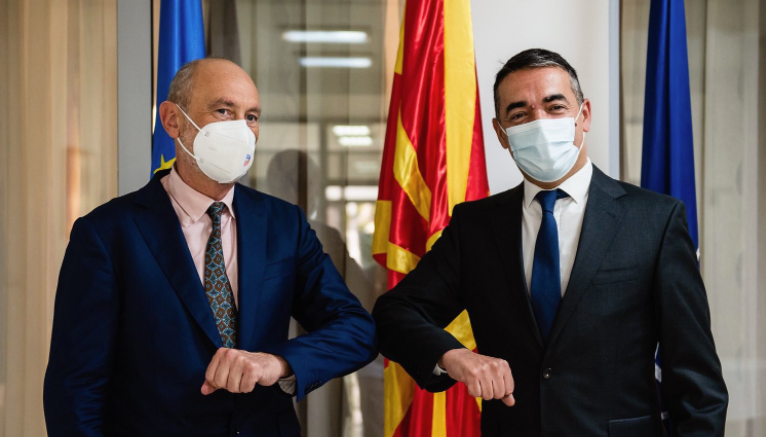 The position of the European Commission is very clear, from the very beginning the EC is very interested to see the holding of an intergovernmental conference with your country, as well as with Albania, which, in fact, means starting negotiations with Macedonia and Albania as soon as possible. On the other hand, the enlargement process is based on merit, and I think both countries have done a lot in the context of that process. However, now is the time to move forward, to make progress, said EU Ambassador David Geer at a joint press conference with Deputy Prime Minister for European Affairs Nikola Dimitrov.

It is obvious that the vast majority of member states want us and our neighbors in Tirana to start negotiations as soon as possible. My understanding is that this is the position of the EC, which in fact recommended it in its report and the enlargement package from October last year. That is our goal and we are working together for that goal. Macedonia met all the conditions and everything it had to do in line with European principles. The start of negotiations is an absolutely deserved thing and because of three things – lost time, years and generations, obvious progress in recent years and demonstrated leadership in dealing with difficult issues, I think the Macedonian story is a test of whether we can trust the EU in terms of the Balkans, said Dimitrov.

Regarding the dispute with Bulgaria, EU Ambassador Geer said that the two countries should agree on a mutually acceptable solution.

As to the expectations from Bulgaria, Deputy Prime Minister Dimitrov said that the new elections and the caretaker government there are a real political context that is challenging and that it is clear, as he said, that “neither we nor the EU in the region, our neighbors and those who are members of the Union have the luxury of waiting any longer.”

Our battle today is a battle of Europe too, one of keeping its word. It is high time we started the deserved accession negotiations so that we all emerge as winners. I wish you a happy Europe Day, said Dimitrov.

Geer: Illegal constructions at Ohrid lakeside should be removed

Dimitrov: EU to show it is serious about enlargement

Dimitrov: If negotiations don’t start, our country, Bulgaria and EU will be losers