The scandalous vote on the law on state prosecutors on Sunday, when the Parliament was pressured to vote twice – until it got the vote “right” – shocked the country but so did the response from Zoran Zaev. The law his SDSM party proposed mocks some of the principles Zaev ran on, such as the free use of wiretaps to persecute high level politicians. Now that Zaev faces a growing number of scandals, and wiretaps that point his way, he demanded that the Parliament bans prosecutors from using wiretaps in the future.

This betrayal of what is left of the principles of Zaev’s 2015 Colored Revolution caused cynical response, including for its former participants, especially now that Zaev wants to celebrate his legislative coup with a march through downtown Skopje.

After you sent Lady Justice packing, now you want to march for justice? You’re just marching toward a defeat at the April elections. Don’t forget your paint, drily obseved law professor Gordana Siljanovska – Davkova, who broke with the Colored Revolution and was the VMRO-DPMNE presidential candidate in 2019. The Colored Revolution protesters would throw paint on Government buildings as a signature protest sign.

And Branimir Jovanovic, a far left Colored Revolution activist who left the Finance Ministry where he was appointed by SDSM in dispute over the party’s policies, was also scathing in his response to Zaev’s call for a march for justice.

When you march next to the Justice Ministry don’t forget to take a turn to the Marriott hotel to give your thanks to Saso Mijalkov for his help in passing the law. Then go to the Sistina clinic and give your regards to Orce Kamcev, the newly minted warrior against corruption and injustice. Then go to Krsto Mukoski and the other pardoned members of Parliament who helped ban the use of wiretaps. No need to march to Budapest, Nikola Gruevski will be back soon anyway, Jovanovic chastised his former party. 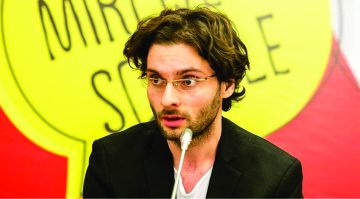 And VMRO-DPMNE member of Parliament Antonio Milososki shared a list, apparently distributed through SDSM, asking various local branches to contribute activists for the march. The list demands 1.000 people to come to Skopje from Kumanovo, 300 from Veles and Stip each, 120 from Tetovo… It’s a major downfall for SDSM, which was able to bring out people from Skopje for the Colored Revolution, promising the independent minded voters closure for alleged crimes which SDSM attributed to the VMRO party.

The opposition is also sharing a draft program for the rally, under which the openly bribed and blackmailed member of Parliament Krsto Mukoski, who SDSM wanted tried as terrorist but now welcomes to its ranks, will open the rally by performing the national anthem. Under the mock program, Frosina Remenski, the former SDSM deputy leader who now stands trial for corruption, will deliver the opening statement, her colleague Aleksandar Kiracovski will amuse the public with the same guitar skills he used on Racket suspect Boki 13, SDSM Mayor of Suto Orizari Kurto Dudus will discuss on the important of the rule of law shortly after being released by a judge from one of the numerous violent attack charges against him and of course – Zoran Zaev and Saso Mijalkov will be the chief speakers.