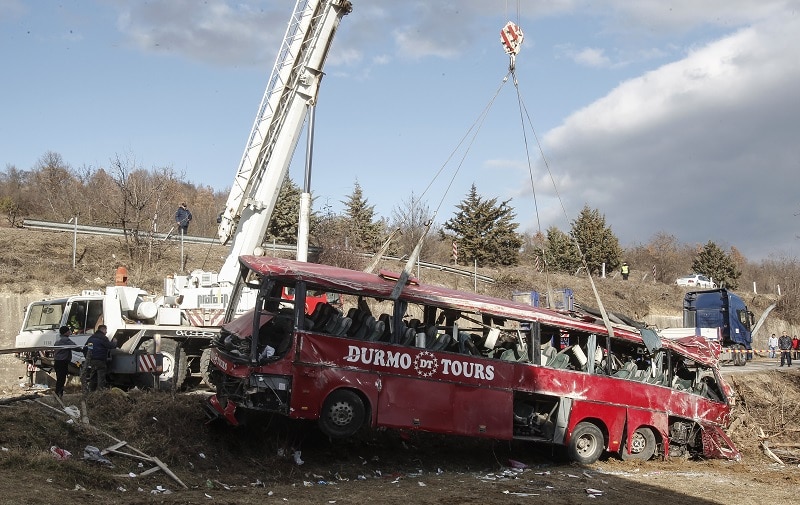 Besnik Halimi, a driver working for the Gostivar based Durmo Tours bus agency, changed his initial testimony in which he confirmed that the buses had a device used to fool the speed sensors during the court hearing today. The device could be activated by the driver and it would tamper with the results of the speed sensor which is mandatory for all buses.

A Durmo Tours bus driving passengers from Skopje to Gostivar crashed on the Skopje – Tetovo highway in February, killing 16 people, while three dozens were left injured.

Driver Xhemail Salii told the court about the device, and Halimi also told this to the prosecutors, but now he altered his statement to “I don’t recall”. The prosecutors examined him as a hostile witness because of this and prosecutor Darko Jakimovski asked for the court’s approval to confront Halimi with his previous statement. It referred to the Durmo Tours buses, including the one involved in the fatal crash.

I haven’t worked on this line since 2014, and I don’t remember anything. I am not as intelligent as you think. I’m 62 years old. I didn’t read the statement you gave me to sign, Halimi defended himself.

Durmo Tours owner tried Durmis Beluli to shift the blame on the driver, Manoel Trifunovski, and his alleged health issues. The investigation pointed toward the fact that Beluli was allowed to inspect the safety of his own buses in a garage he also owned, and now the revelations about the speed sensors indicate that the drivers were encouraged to drive above the speed limit.

Stojanoska: All citizens of Gostivar, regardless of their ethnic background, are angry at Zaev

VMRO-DPMNE President Hristijan Mickoski responded to the latest leak showing a direct connection between the Zaev family and underworld figures plotting to silence opposition activists by burning their cars, and the protest from two top judiciary officials linked to Zaev after they were publicly named...
Macedonia 05.07.20 | 16:08