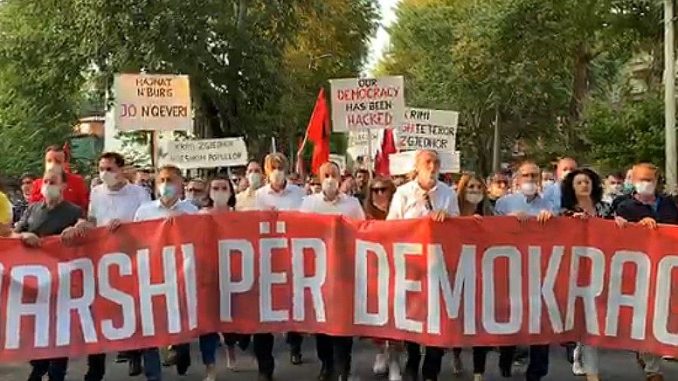 A country that is about to open negotiations with the EU must not allow some of its citizens to be denied the right to elect and to be elected, one of the main human and political rights in the EU, the Alliance for the Albanians/Alternativa coalition said Monday at a protest it organized in Skopje under the slogan “March for Democracy.”

According to the coalition, DUI is not the winner in the elections and has no legitimacy to represent the Albanian people in Macedonia. Addressing the protest in front of the EU Delegation office, the leaders of Alliance for Albanians, Zijadin Sela, and of Alternativa, Afrim Gashi, issued two demands to the EU member countries – DUI’s legitimacy as representative of the Albanians not to be recognized and a process of radical reform of the Electoral Code to be launched.

DUI is not the winner in the elections, but a robber of the Albanian political will. It may have legality according to the State Election Commission, but it will never have the legitimacy to represent the Albanian people in Macedonia. If we are a country striving to integrate into the EU, freedom and democracy should be the key words in the integration process. We urge the EU countries to condemn the abuse of the right to vote and not to recognize DUI’s legitimacy to represent the Albanians in Macedonia as well as to support the process of radical reform of the Electoral Code ahead of the next elections, speakers at the protest said.

According to the organizers, the 15 July elections were the most undemocratic elections ever held in the country.

They accused of ‘manipulation of the will of Albanian voters.’ “It was brutally evident in the recent elections, which sounded our alarm, because if we don’t react today, tomorrow it could be too late,” they said.

According to them, vote buying, racketeering of voters, corruption, voter intimidation and other types of election fraud is the signal that the ‘Albanian society in Macedonia is held hostage by mobsters.’ 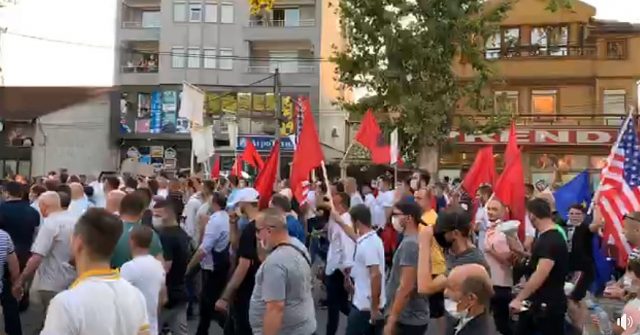 The fight for democracy will not end, organizers vowed. “The coalition won seats in Parliament and they will be the voice of Albanians either as part of the majority or in opposition.”

Protesters marched in the streets of Skopje from the Cair municipality, passing in front of the government and ending the protest outside the EU Delegation office in downtown Skopje.

Protesters waved the flags of Albania, the United States and the EU and carried banners reading “Our democracy was hacked,” “Thieves in jail, not in government,” and “State Election Crime.”

Police presence was heightened during the protest, which was mainly held in line with the anti-coronavirus protocols of the health authorities.