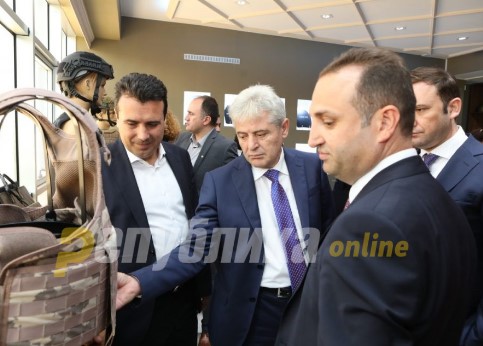 On top of facing opposition in his own party, Zoran Zaev was warned by his coalition partner DUI that the Government may collapse if he implements his proposal for radical cuts in public sector wages.

Zaev came out with a proposal of budget cuts, instead of the stimulus approach taken by most European countries, and called that the entire 120-130 thousand strong public administration is placed on the minimum wage of 230 EUR for two months. This, Zaev said, will be necessary to prevent a collapse of the budget which he estimates will be between 1.3 and 2.2 billion EUR in the red (out of projected revenues of a little under four billion EUR).

But the Government led by Zaev loyalist Oliver Spasovski yesterday came out with a modest stimulus proposal, and rejected his idea out of hand. Netpress reports that Zaev faced opposition from some of his own lieutenants that they oppose the proposal, but the clearest red light came from DUI.

A few hours before the press conference led by interim Prime Minister Oliver Spasovski, DUI gave a clear notice to Zaev that their ministers will not join Spasovski if the proposed cuts remain. This, Zaev was told, will strongly undermine the coalition and would make the Government non-viable during the crisis situation, Nepress reports.

DUI openly condemned the proposal through its Economy Minister Kreshnik Bekteshi. With elections likely some time by the end of the year, both ruling parties are aware of the damage they will suffer if they mismanage the economic impact of the crisis.