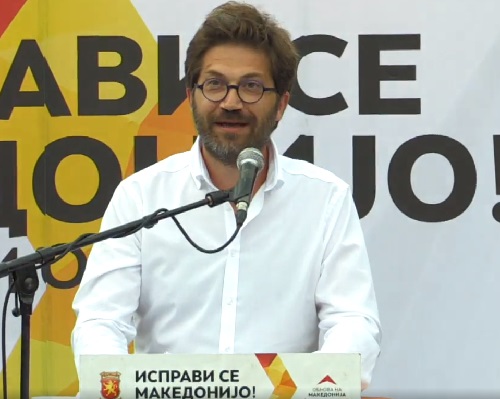 Igor Durlovski, the lead VMRO-DPMNE in the 5th district, asked his opposite candidate Radmila Sekerinska from SDSM why hasn’t her party announced a joint platform with its coalition partner BESA. The ethnic Albanian party has been known for very radical positions and has even endorsed a cantonal form of Government in Macedonia, with units based on ethnicity,

Radmila Sekerinska and Zoran Zaev need to answer a crucial question – are they the first coalition in history that doesn’t have a joint platform. Where is the joint SDSM – BESA electoral program? I ask Sekerinska, does SDSM stand behind the BESA positions? Including their position for cantons in Macedonia? What else does SDSM plan to sell out?, Durlovski asked Sekerinska during a campaign event in Krusevo.

Durlovski asked the supporters in Krusevo to draw inspiration from the heroic past of the city, which raised the Ilinden Uprising against the Ottoman Empire in 1903, in a heroic push for Macedonian statehood. “We will not forget that act of mass self-sacrifice, and we will not erase it from Macedonian history”, Durlovski said.

Minister Sekerinska presents the new US made armored vehicles