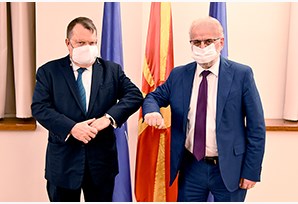 According to the Parliament’s press service, Xhaferi expressed regret that during the German presidency of the European Union, differences with Bulgaria were not overcome and thus did not pave the way for the first intergovernmental conference. 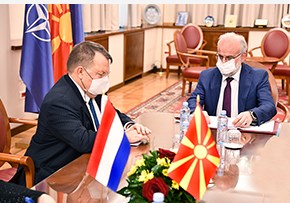 Emphasizing that the communication channels remain open and the dialogue between the two countries continues, Xhaferi expressed hope that in the coming period the differences will be overcome. He stressed that the ruling majority formed after the elections in July, remains fully committed to the European agenda and continues to work intensively on the implementation of all activities for Europeanization of the country and getting closer to Euro-Atlantic structures, reads the press release.

Ambassador Jan Kop commended the country for holding fair and democratic elections and in a short time forming a government in conditions of interim government, state of emergency and pandemic. The fact that the Republic of Macedonia received the green light to start negotiations in March 2020, according to Jan Kop, means that the country’s EU membership isn’t question of if but when.

Xhaferi: Let’s overcome pandemic and move towards EU in 2021