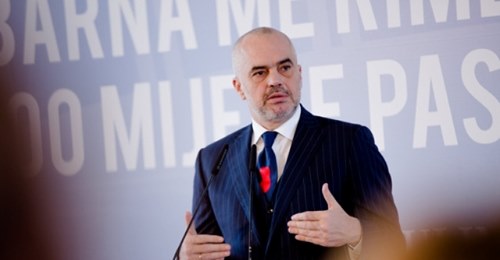 Albanian Prime Minister Edi Rama said that Albania will wait for Macedonia so that both countries can open EU accession talks at the same time. Macedonia and Albania are in a group of sorts and a number of EU member states oppose separating them in the EU accession process.

Meanwhile, Bulgaria opposes Macedonia’s EU accession talks, while the Netherlands is blocking Albania, keeping both countries tied. At times, when it seems that Macedonia is ahead, public opinion in the country advocates separating from Albania. Other times, when the pressure from Bulgaria seems stronger, Albanian public opinion demands that they are allowed to move ahead on their own.

Speaking after the annual stabilization and association conference in Brussels, Rama said that he hopes for wisdom and that the dispute between Macedonia and Bulgaria will be overcome. According to Rama, Macedonia and Bulgaria should not wait for instructions from Brussels or London, and settle the issue themselves, leaving history to historians and out of daily politics.
EU Enlargement Commissioner Oliver Varhelyi added that both countries will advance based on their own merit and will open accession talks once they meet the conditions.