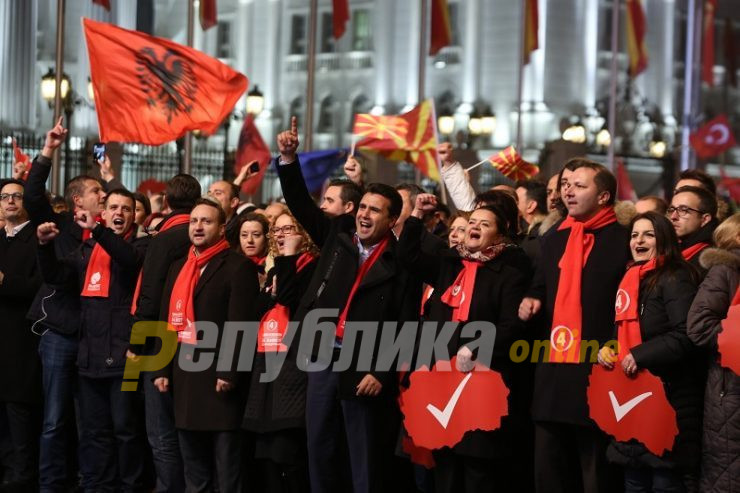 The ethnic break-down of the coming census seems to be already agreed between the ruling parties. Under the proposed law, the census will take place in April, using very lax security criteria and will include non-residents – citizens who have moved out of the country long ago.

Eurostat criteria call for a census only of the actual residents in a country, and emigrants who have left no longer than one year ago. Instead, the Macedonian Statistics Bureau will allow people to add residents on the list, just by stating their personal ID numbers. The SDSM – DUI coalition refused a proposal from the opposition VMRO-DPMNE party to have the census teams take fingerprints – this would prevent double counting and also would allow matching with the existing database of citizens. But this, as other four dozen proposals from the opposition, were rejected by the ruling coalition.

VMRO-DPMNE official Antonio Milososki criticized the coalition of preparing a census under rules that are far away from European standards, with no guarantees that the process will be accurate and with the counting of people who have moved out of Macedonia long ago, only to make sure that the Albanian share of population is at an agreed level.

VMRO-DPMNE keeps warning that the pandemic is still with us and that the census bears a risk when teams go to people’s homes and can endanger their health as well as their own. But the Government won’t postpone the census, which raises suspicions that they are not treating this as a mere statistical operation but as a political deal between SDSM and DUI, Milososki said, adding that the opposition proposed a short delay, until June, when some of the most at risk citizens will be vaccinated, but the Government refused.

Under the 2001 Ohrid peace treaty, some of the political clout ethnic Albanian parties have depends on having the Albanian population over 20 percent of the total. The 2002 census, conducted after the 2001 civil war, put it at 25 percent. Albanian parties insist that emigrants are counted as residents, after concerns that the high emigration rate could push the number below 20 percent, and SDSM agreed to a very lax census where teams will not require identity documents and will allow extended family members or friends to vouch for absent citizens.

If we count people who live in Canada, US, if we count relatives who live in Switzerland, Australia, Germany, Sweden, then we are not having a census of actual residents but putting together a registry of citizens, Milososki said.

As proposed, the draft census law will allow an ethnic Albanian director of the Statistics Bureau, Ilmi Selami, to veto any major decisions linked to the census. This move by the ruling party indicated that the Albanian parties insisted on having political control over the process.

VMRO-DPMNE President Hristijan Mickoski yesterday said that the opposition will not recognize the results of the census if conducted under these circumstances.

VMRO-DPMNE will not recognize a fraudulent census