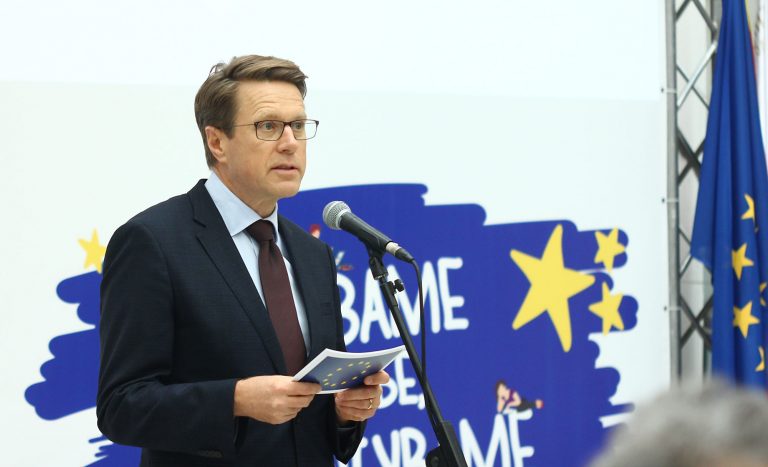 European Union Ambassador to Macedonia Samuel Zbogar said that the country should have a legitimate Government soon, but acknowledged that the coronavirus crisis won’t allow holding elections too soon. The ruling SDSM party is demanding that elections take place on July 5, despite the fact that the coronavirus crisis is currently worse than it was at the presumed peak in April, while the opposition demands a safer date in August or September.

It is not healthy for a democracy to be left under a state of emergency for too long. At the same time, the pubilc healthcare situation should be taken into consideration when holding elections. Political leaders should balance these two elements when reaching their decision. It is important that conditions for free, fair and credible elections are met and they are held in accordance with OSCE/ODIHR recommendations and international standards and practices, This was the message sent out by Commissioner Oliver Varhelyi a few days ago, Zbogar said.

Commissioner Varhelyi warned the Government, whose officials have been campaigning for weeks eve as more and more of them get infected or end up in quarantine, that all parties should be allowed to campaign and present their positions in front of the voters.

In an interview with MKD.mk Zbogar also said that the negotiating framework with Macedonia and Albania will be prepared in June and will then be sent for appoval to the EU member states. Bulgaria is currently raising issues with the implementation of the 2017 Zaev – Borisov treaty, and demands major concessions on national identity and history issues before it approves the opening of accession talks. When asked about the Bulgarian demands, Zbogar said that the criteria for joining the EU are outlined in the 1993 Copenhagen rules. The same position was evoked by Macedonia and EU officials frequently during the Greek blackmail, only for Macedonia to be eventually have the Prespa treaty imposed on it.

The Prespa treaty and the Treaty of good-neighborly relations with Bulgaria are positive examples for the region and beyond. Above all, it is important that these bilateral treaties continue to be implemented in the spirit of good will, Zbogar told the Macedonian public.