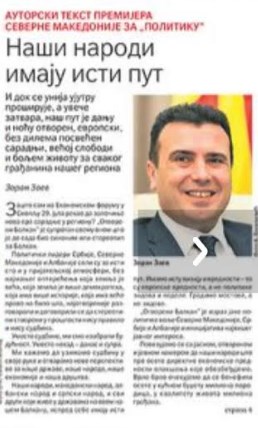 “Open Balkans” is complementary, not contrary to the European Union. It strenghtens our European agenda, with all three countries remaining committed to their agendas and commitments to join the EU, Prime Minister Zoran Zaev wrote in an article  published in the Serbian newspaper “Politika”.

In the article, Zaev emphasizes that the three countries – Macedonia, Serbia and Albania agree that their EU bid will not stop due to the confusing signals sent by Brussels regarding enlargement.

And while the Union expands in the morning and closes in the evening, our path is open day and night, European, without dilemmas dedicated to cooperation, friendship, solidarity, more freedom and a better life for every citizen of our region, writes Zaev.

He says that “Open Balkans” is an expression of the strong political will of Macedonia, Serbia and Albania and an initiative of the highest public interest and that this initiative is contrary to everything that is so far a synonym or stereotype for the Balkans.

Our peoples, the Macedonian, the Albanian and the Serbian people and all others living in the countries of our Balkans, have the same path before them. We have the same vision and values – these are European values, not walls and policies of division. We are building bridges, not walls, says Zaev.

According to him, what these three countries initiate is European because it contains the principles of the European Union – freedom of movement of people, goods, capital and services.

Open Balkans is a demonstration of progress, our step towards which we are directed following the will of the majority of our peoples. No more waiting and no rejection. Everyone’s support is welcome on our common European path, and the support of the European Union as our natural, expected and long-called partner is most welcome, underlines Zaev.

He adds that the initiative of the three Balkan countries is open to all other countries in the Western Balkans. “Join us, for the sake of our peoples”, says Zaev.

Regarding the economic benefits of this initiative, Zaev points out that the benefits are expected in the domestic budgets and in improving the quality of life for millions of citizens.

The only way we can improve life in the region, according to Zaev, is to bring Europe home.