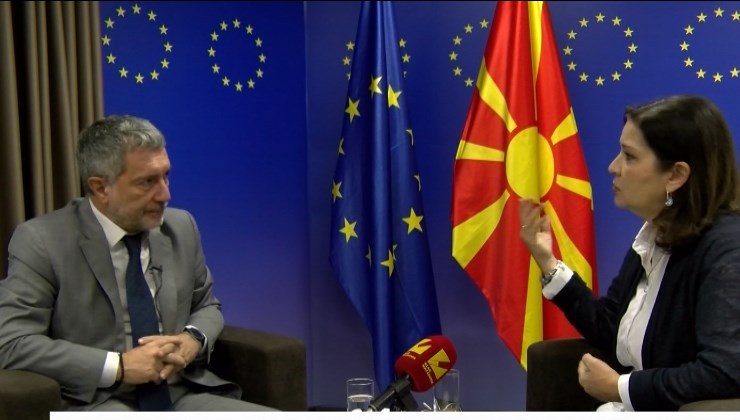 Nicola Bertolini, head of the cooperation section of the EU embassy in Macedonia, had some stern words in an interview with TV Klan, saying that “this is a non – functional state”.

Bertolini was objecting to the fact that the EU mission has serious difficulty in finding partners it can give funding for various projects because of poor quality of the public administration and the refusal of department heads to delegate authority.

I think that “North” Macedonia has a huge problem in the human resources capacity, specifically in the ministries and the local authorities. We the donors can count only a few persons in each institution which are committed, skilled, very good. They can not absorb a lot of money because only 10, 20 percent of the people in the ministry are able to work with us. The structure is made in such a way that people are not empowered to work and to produce. The minister is not delegating down, the technical people are capable but they are blocked, they can’t move. There is a feeling in this country that if the boss doesn’t say anything, maybe I will make a mistake, maybe it’s best I stay calm, Bertolini said.

Bertolini continued by blaming the 2001 Ohrid peace treaty, which introduced a quotas for ethnic Albanians in the public administration often at the detriment of ability, and divisions in the administration decision making along ethnic lines as a move that “did not help”.

We are confused by different messages from different ministries and agencies in power. This country has a big problem of organization. For example, we have 130 million EUR allocated but not used for railway infrastructure from Skopje to Sofia. There is a lack of some agreement between some institutions and they are fighting, not agreeing. The Railway Company does not respond to the Minister of Transport, there is not a clear line of command in this country, and we are waiting on them to agree. This is a non – functional state. This is a real problem for the country, Bertolini said.