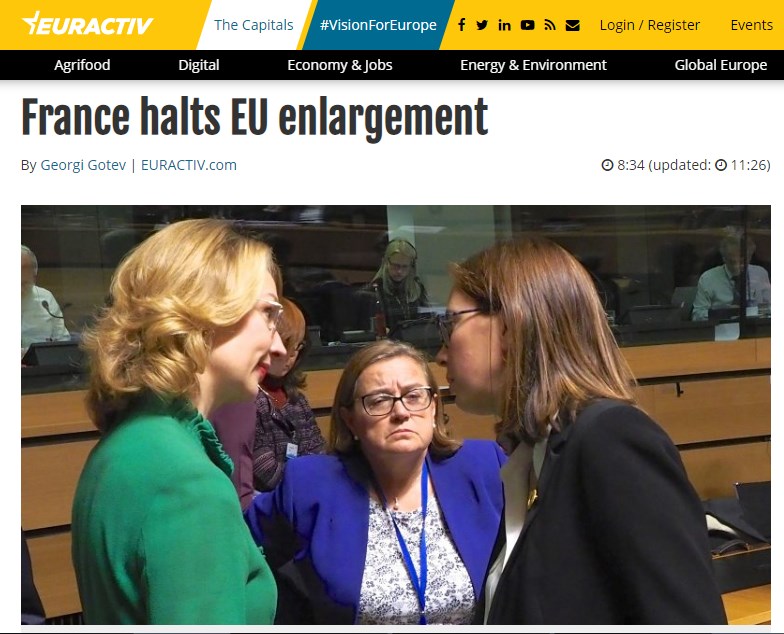 France blocked the opening of accession talks with North Macedonia on Tuesday (15 October), despite the promise made by the EU to Skopje that its historic name deal with Greece, the Prespa agreement, would earn it a ticket to EU membership negotiations, Euractiv news agency wrote.

EU ministers who met at the General Affairs Council in Luxembourg discussed the opening of the accession talks to the EU with Albania and North Macedonia. A similar gathering in June decided to postpone the decision for October. This meeting, however, was the last under the Juncker commission and was seen as make-or-break, particularly after the German Bundestag backed the opening of talks in September, the news agency wrote.

Only France blocked North Macedonia, while the Netherlands and Denmark backed Skopje but opposed Tirana’s bid. Finland proposed Albania’s case to be separated from that of North Macedonia, but France disagreed.

According to Euractiv, Finnish Foreign Minister Tytti Tuppurainen, whose country holds the rotating EU presidency, said that in the absence of agreement, the issue was being put on the summit agenda. EU leaders will come to Brussels on Thursday and Friday already with an awkward agenda, including how to avoid a hard Brexit and the response to the Turkish incursion in Syria.

French European Affairs Minister Amélie de Montchalin said her country was against opening accession talks for the two Western Balkan countries. She explained that more reforms are needed in both countries, but also made clear that bigger issues had to be addressed, including a deep reform of the way the Commission conducts the negotiations and addressing the issue of brain drain in the respective countries, the news agency said.

Euractiv acknowledges that brain drain is indeed a problem, but the issue has not been addressed in the case of the accession process of the new EU members, or of Serbia and Montenegro, the two Western Balkans countries already in the process of accession talks.

The news agency stressed that De Montchalin said that criteria set in 2018 should be respected and in the case of North Macedonia, she specified the reform of the special prosecutor office, which in her words has not been completed.

These countries will be part of the European Union one day… but it is too early to open the legal process towards enlargement, a French presidency official said.

As the news agency writes, in Berlin, a government official said the opening of accession talks was a priority for Germany, which will hold its annual summit with France on Wednesday.

An insider told Euractiv that France could change its position at the summit only in the hypothetical scenario of a major trade-off, such as Germany taking on board French ideas for the reform of the eurozone.

Macron is already thinking about the presidential elections of 2022. He is also anxious not to provoke Russia, who frowns at the EU accession of territories where it has kept an influence, such as Serbia, Montenegro and North Macedonia. Montenegro has joined NATO. Macedonia hopes to be next in early 2020, while Serbia has no plans to join the Atlantic alliance, the news agency says.

It also emphasizes that opening talks is an important milestone, but the negotiations process lasts several years and member countries can make use of their veto in case the candidate country doesn’t deliver on reforms and commitments.

Many countries believe that opening accession negotiations with North Macedonia and Albania is of utmost importance, given the difficult geopolitical situation, Euractiv writes.