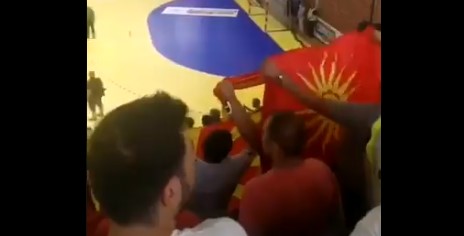 A video of a fan attending the Macedonia – Greece handball qualifier went viral yesterday, after he braved the security guards and refused to put away the Kutles star flag.

Macedonia beat Greece in an emotionally charged game and secured the first place in its group to qualify for the 2020 European Championship. After the defiant celebration in Skopje, as Vardar won the EHF Champions League, where 100.000 people chanted “Never North, Always Macedonia”, the qualifier against Greece was moved to a small sports hall in Strumica – Zoran Zaev’s stronghold. Sports fans objected that they can’t get tickets and that the seats are being distributed among Zaev loyalists, to avoid a repeat of the scenes in Skopje.

Never the less, the crowd did chant “Never North, Always Macedonia” and the Kutles flag was left waving. Greece forced Macedonia to give up on the flag in 1995, as one of the conditions to lift its crippling trade embargo of Macedonia. As emotions over the imposed name deal run high, the flag is making a comeback, especially during sport celebrations.

The 16 rays sun symbol is named the Kutles or Vergina star after the town built on the site of the ancient city of Aiga, where the tomb of Philip II of Macedon was excavated. The symbol is prominently displayed on the tomb, including on the golden burial casket. It’s red and yellow variant is used by Macedonians, while a blue – yellow version is adopted by Greeks as a regional flag.