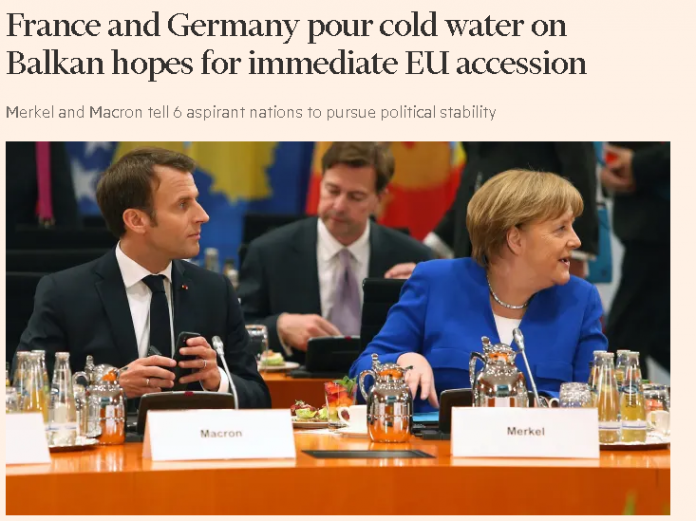 German chancellor Angela Merkel and French president Emmanuel Macron have suggested to six western Balkan countries aspiring to EU membership that there is little immediate prospect of their joining the bloc, telling them to get their houses in order first, Financial Times wrote.

Mr Macron focused on the need for “political stability” in the region, saying that Paris would assist in key economic, social, security and rule of law reforms rather than through the EU enlargement process.

“We [will] work together on the stability of the region . . . Since 2000, we have withdrawn from the region, but today we want to work together,” he said before a meeting in Berlin with the leaders of Albania, Bosnia and Herzegovina, Montenegro, North Macedonia, Serbia and Kosovo.

The EU has long held out the possibility of bringing western Balkan countries into the bloc to foster economic progress and improve broader regional stability. Montenegro and Serbia have already formally opened negotiations to join the EU, while Albania and North Macedonia are candidates and hope to be given the green light to open formal accession negotiations at a June summit, which other aspiring nations will see as a test of the EU’s readiness to engage.

Ms Merkel said she hoped the Berlin meeting would contribute to solving the dispute between Serbia and its former province Kosovo, whose 2008 declaration of independence it does not recognise. The German chancellor has been a stalwart opponent of any solution to the decades-long dispute that would involve a territory swap — an idea being floated in the region.

Washington and Brussels have said they would endorse such a deal between Belgrade and Pristina. Observers say Ms Merkel and Mr Macron hosted the summit because of concern at developments in the region, despite the groundbreaking success of North Macedonia’s naming deal, struck with Greece after decades of impasse. “If you look at leaders calling for redrawing of borders, viewing minorities as security threats, and building up military capacities, these are very worrying trends,” said Adi Cerimagic, a Berlin-based analyst with the European Stability Initiative and an author of a recent report on the region.

“There is something like a Brexit mood in the sense that leaders in the region do not understand how important the EU is for them, when it is actually the most important partner,” he said, noting that one decade ago, there was more optimism about accession in each of the countries.

“This summit serves to remind them that the EU is still there.”

The conference comes as Brussels has raised alarm about the increasing role of China and Russia in the region.

Mr Macron said he understood that other actors “have their interests in the Balkans, but that it is clear that European interests matter more”.

Mother of four-month-old baby from Kocani, who died two days ago, is looking for answers from the authorities

72 new coronavirus cases have been confirmed in the country, bringing the total number of diagnosed patients to 555, the Ministry of Health informed on Sunday. The Ministry also informed that a 63-year-old man from Labunista (Struga), who was hospitalized in a very critical condition, passed away Infectious...
Macedonia 05.04.20 | 12:32