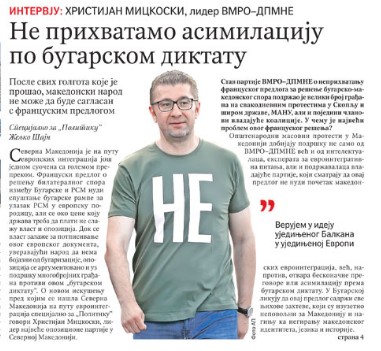 The French proposal to resolve the bilateral dispute between Bulgaria and Macedonia does not offer the beginning of Macedonian European integration, but, on the contrary, opens endless negotiations or assimilation according to Bulgarian dictate, says the leader of VMRO-DPMNE, Hristijan Mickoski.

In Bulgaria, they rejoice that this proposal contains all their demands, which are extremely unfavorable for Macedonia and tend to deny the Macedonian identity, language and history, Mickoski claims in an interview with Belgrade-based “Politika”.

According to him, as reported by MIA’s correspondent in Belgrade, here again we have blackmail, ultimatums, dictation.

If the unilateral declaration of Bulgaria is added to this content, which directly denies the uniqueness of the Macedonian language and notes that it is a Bulgarian dialect, it is obvious what position Macedonia is in, which does not have any guarantees from the European Union for the European perspective, says Mickoski.

As he assessed the French proposal, “after all the Golgothas it went through, the Macedonian people cannot agree with this proposal”.

VMRO-DPMNE, as a responsible party, proposes to the ruling SDSM to reject the French proposal for European integration, and we will give up the request for early elections, said Mickoski.

He claims that the protests in the country receive support not only from VMRO-DPMNE, but also from intellectuals, experts on European integration and supporters of the ruling party, adding that the country has its own goals and must firmly and decisively stand behind its interests.

We have been candidates for EU membership for 17 years and we must work to get that EU entry date with dignity, he said.

Speaking about the Open Balkans, Mickoski says that he supports that initiative, but that it must not be an alternative to the EU.

The reforms of the Balkan countries are urgent and should continue regardless of whether they are the result of some regional cooperation or are implemented by each country separately. I believe in the idea of a united Balkans in a united Europe, Mickoski adds in the interview with “Politika”.