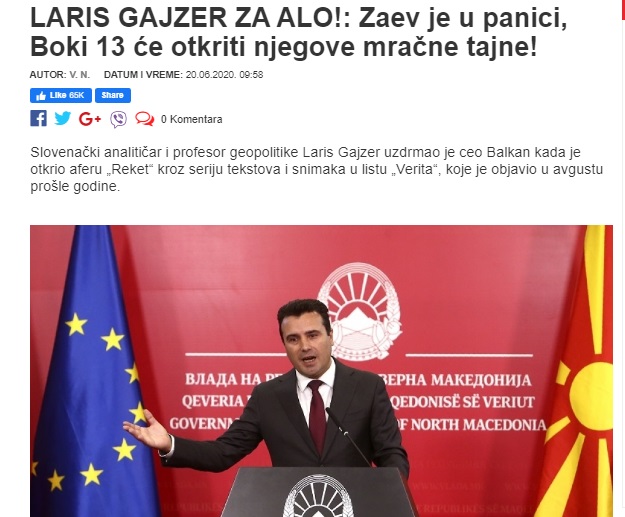 Italian based journalist Laris Gaiser, who published some of the main revelations leading to the major Racket scandal, says that the sentencing of Katica Janeva and Bojan Jovanovski – Boki 13 is just the beginning of the scandal. In an interview in Serbia, Gaiser says that the scandal leads directly toward Zoran Zaev.

These past months Zaev wanted the elections to come as soon as possibly as he is petrified of the possible sentence. He took a sigh of relief as the elections were set, but after Boki 13’s statement before the court, the second round begins. With a change in the political environment and a purified judiciary, I’m sure that Boki and Katica will find the courage they need to tell the whole story, Gaiser said.

During his sentencing to nine years in prison, Boki 13 confessed that the money the group took is now in the hands of Zoran Zaev and his brother Vice. Gaiser published some of the key recordings that showed Boki taking a large bag of money from a businessman he was extorting for 1,5 million EUR. The prosecutors at the Racket trial noticeably tried to ignore the final destination of the money, or any links pointing to Zaev.

A year after my articles nobody alive believes in Zaev’s innocence. His continued leadership of the SDSM party condemns them all to an electoral defeat. Zaev is finished in the political scene, with or without further criminal investigations into him, Gaiser added.