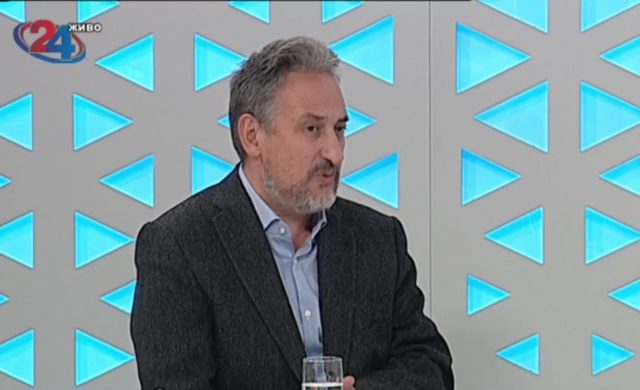 Former Prime Minister Ljubco Georgievski claims that between to 20 of the cases initiated by the Special Prosecutor’s Office, were being used for racketeering. The much lauded institution, created under international pressure, is now imploding after Special Prosecutor Katica Janeva was arrested on charges of extorting millions from businessmen she was prosecuting.

When the SPO had its mandate expire, suddenly we saw a group of intellectuals, media outlets, experts, who claimed that the SPO can still continue pressing new charges. The Supreme Court found against the SPO, and this group turned on the court as well. And this led to a situation when the SPO deliberately compromised itself with 15 to 20 new charges which could have easily been initiated by the OJO office of state prosecutors. These cases were used by the SPO for racketeering. I have a feeling that there were many more companies that were extorted than just the Orce Kamcev company, Georgievski said.

He pointed to two cases in particular – the Postal Bank, which goes back to the days when Georgievski’s Government allowed private companies to work with the state owned bank to turn it around. Janeva filed charges against the companies involved and this led to widespread media speculation that she was extorting the company owners just as she did with Orce Kamcev who she charged with money laundering. This refers only to the financial extortion – most of Janeva’s cases had a clearly political goal – the removal of VMRO-DPMNE from power and persecution of Nikola Gruevski and his team, and it is apparently only later that she tried to cash in on her unchecked power.

The other, much larger case Georgievski mentioned, is the Deutsche Telekom bribery scandal in which the German company and its Hungarian subsidiary Magyar Telekom paid millions to top SDSM and DUI party officials in Macedonia in 2005 through Cyprus shell companies to get them to postpone the opening of the Macedonian telecommunications market to competition. The case was tried in the US under the corrupt foreign practices act and was eagerly taken over by Janeva as one of her very first acts in office. The case was expected to involve top DUI officials Ali Ahmeti and Musa Xhaferi, as well as former Prime Minister Vlado Buckovski and, judging by the US court documents, possibly President Branko Crvenkovski. But it quickly went nowhere under Janeva and according to Georgievski, she preferred to use it to extort money.

During his TV24 interview, Georgievski also discussed the proposal to greatly reduce the prison terms for abuse of office. Georgievski said that, after assuimg power in 1998, he wanted to go after his predecessor as Prime Minister Branko Crvenkovski, for the numerous clearly criminal sales of state owned companies and factories. The dark era of so-called “privatization” or “transition” in the 1990ies meant that overnight the Communist era managers of the companies became owners, often of greatly downsized companies and stripped them and sold the land or the buildings while firing the workers. Georgievski said that he was undermined in his plan by the fact that the legal requirement – the article forbidding “abuse of office” – was removed from the criminal code.

We no longer had article 353. It was in effect under Communism, but SDSM removed it and they did what they wanted for eight years. We re-introduced it to protect the country from corruption, Georgievski said. SDSM supporters insist that the proposal currently before the Constitutional Court will help mainly VMRO-DPMNE officials from the Nikola Gruevski administration, but it would also shield the currently outgoing Prime Minister Zoran Zaev, and those around him, given the numerous corruption scandals such as the Katica Janeva racketeering affair.

Ljubco Georgievski was VMRO-DPMNE leader and Prime Minister between 1998 and 2002. His term, which began with economic reforms and a strategic re-orientation of Macedonia toward the West was cut short by the 2000 wiretapping scandal – an affair very similar to the 2015 scandal – and the subsequent 2001 civil war. While nominally able to finish his term, Georgievski was forced into a broad coalition government with SDSM and was voted out in 2002. He accused the UBK intelligence service of engineering his overthrow and sparking a war in the process, a situation which largely repeated itself under Gruevski. Asked about the influence of the intelligence apparatus in Macedonian politics, Georgievski said that he asked his Interior Ministers Pavle Trajanov and Dosta Dimovska to begin the process of lustration – the opening of the secret police files to expose public figures who worked for the Communist era police. “Both assured me that the dossiers are destroyed”, Georgievski said. Gruevski began the process in 2012, and a number of high profile files were made public. “I was lied to, apparently the files were there”, Georgievski now concedes.