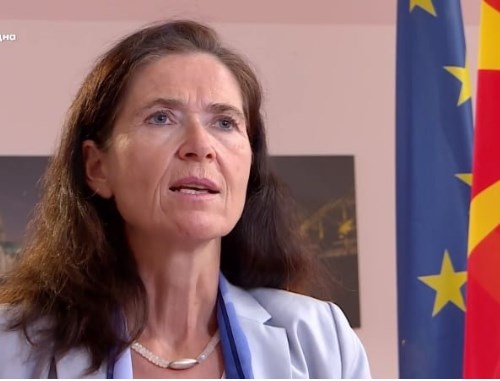 There are good neighborly relations between Macedonia and Bulgaria. Bulgaria was the first to recognize Macedonia as independent and is a strong supporter of the Europeanization of the entire region, especially the process of bringing Macedonia closer to the EU. Apart from that, there is the Good Neighborhood Agreement and, in my opinion, it should be fulfilled with life and consequently implemented, said the German Ambassador to Macedonia, Anke Holstein.

In an interview with Studio 10 on TV 24, Holstein stressed that Germany will remain a strong supporter of Macedonia. It is important, she said, to use the time for reforms and to bring Europe to Macedonia.

She referred to the Elysee Treaty, emphasizing that it did not mention any obstacles related to identity, language and history between France and Germany.

The Elysee Treaty was signed 18 years after the end of World War II and it put an end to the so-called hereditary enmity between the two countries, which created a political, legal and symbolic basis for mutual cooperation, the Ambassador said.

Regarding the European Union, she stressed that it is a community of values: democracy, rule of law, independent judiciary, free media and full equality for all.

These are values on which the EU is based as a whole and that is our slogan “unity in diversity”. “We must not tolerate developments in member states that are far from those values, Holstein said.