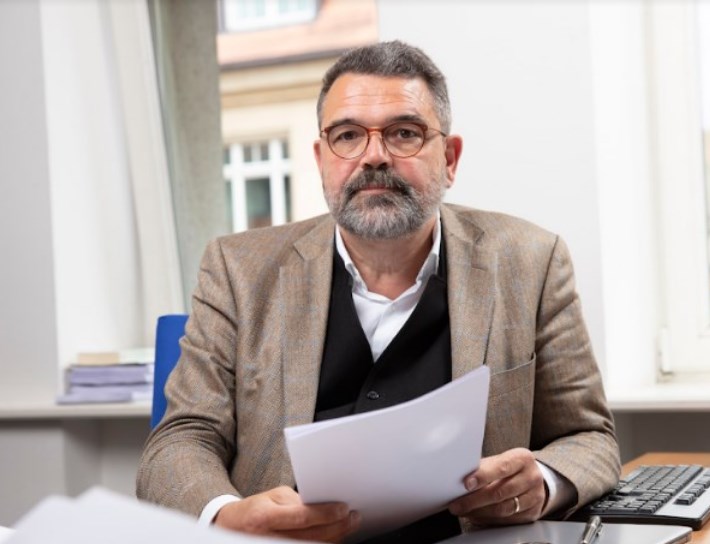 In 2010, in the February 5 issue of the Bulgarian magazine Kultura, the German historian Stefan Troebst published a rather extensive text dedicated to Ivan Vanco Mihajlov. The text was titled “Vanco Mihajlov-terrorist bureaucrat” and so far is known to professional circles in Macedonia, but not to the general public.

Given that it is a trending topic and significant in the given political moment, we will convey the text in three sequels.

A memorial statue of a middle-aged man in a paramilitary uniform was erected in the center of Sofia in the Boris Garden in 1990. It is about Ivan Mihajlov (1896-1990), leader of the terrorist Internal Macedonian Revolutionary Organization (VMRO) from 1928 to 1934, ally of Mussolini, Hitler and the Ustasha Independent Croatian State. In the Balkans, he is known as the mastermind of numerous political assassinations against Macedonian and Bulgarian activists, as well as Bulgarian and Yugoslav politicians, and together with Ante Pavelic he is the author of the 1934 Marseilles assassination. In contrast, he has not only not been prosecuted since 1945, but is still unknown in EU’s Europe today. 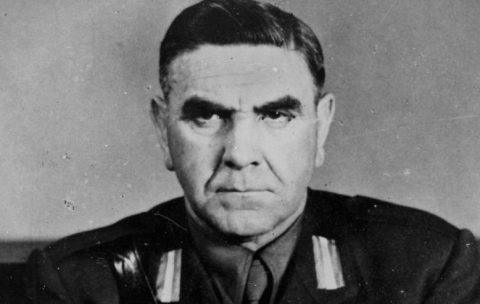 It is an indisputable fact that in Europe, in the period between the two world wars, between the national-revolutionary movements, which aimed at the revision of the Versailles Peace Treaty, the most militarily capable and therefore the most dangerous and ultimately the most efficient is VMRO. Its short-term goal is the annexation of Vardar Macedonia, which since 1918 is part of Yugoslavia, to Bulgaria, and further – the unification of all parts belonging to the historical territory of Macedonia, in a Greater Macedonia, whose capital will be Thessaloniki. VMRO is fighting against the new Yugoslav state from Bulgarian and Albanian territory, with between 1,000-2,000 uniformed Chetniks crossing its borders every spring.

After 1922, VMRO formed a state within a state on the territory of southwestern Bulgaria, in the Petrich region. This is happening with the consent of the authorities in Sofia, although it “gritted its teeth”. That country in a country has an independent tax, police and its own faction in the Bulgarian parliament. Its large diplomatic apparatus cooperates with Turkey and Hungary, concludes alliances with the USSR and Italy. Only Weimar Germany cancels cooperation with VMRO, although even there many politicians, diplomats, entrepreneurs, intellectuals and journalists are big supporters of the organization.

In 1927, different views appeared in the leadership of VMRO regarding the tactics of the organization. The intense partisan struggle has been replaced by the principle of terrorist activity: threes or fives of assassins are directed at proclaimed Yugoslav leaders; suicidal assassinations are being planned against members of the new European post-war order, and death sentences are being handed down against dissidents in their own ranks.

In 1928 this new tactic leads to a sharp internal conflict, which divides the organization into two wings, beginning with mass fratricide. The driving force of this new development in VMRO is Ivan Mihajlov, also known by the pseudonym “Radko Dejanov”. In 1925, a year after the assassination of the charismatic leader of VMRO, Todor Aleksandrov, Ivan Mihajlov joined the three-member central committee of the organization. Todor Aleksandrov, a high school teacher and Bulgarian officer, awarded the Iron Cross by Wilhelm II in 1916, after the First World War, together with the Bulgarian General Aleksander Protogerov, reorganized the organization created in 1893, which initially fought for autonomous Macedonia under the administration of the sultan, giving another direction in the action-annexation of Macedonia to Bulgaria. 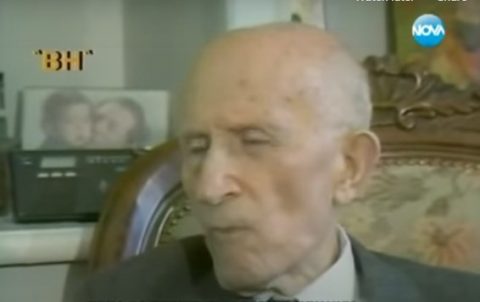 After the deadly plot against Aleksandrov, Mihajlov used the position of a confidant-his secretary to succeed him to the Central Committee. In 1928, Mihajlov ordered the assassination of his colleague and opponent in the Central Committee, General Protogerov, after which he appointed two of his closest collaborators in the leadership of VMRO – Strahil Razvigorov and Ivan Karadzov and thus practically took control of the organization.

Protogerov supporters under the leadership of Pero Shandanov and Naum Tomalevski offer fierce resistance. This led to a long-running civil fratricidal war that claimed hundreds of lives between activists on both sides of the conflict. To this day, the Bulgarian expressions “Macedonian work” or “to finish something in Macedonian” mean to do something in a particularly fierce and bloody way. 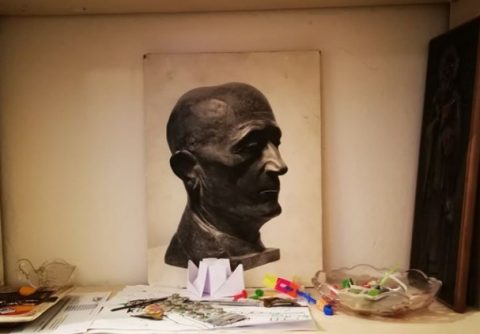 In 1929, Mihajlov began a strategic change in VMRO – moving away from the goal of annexing Macedonia to Bulgaria and setting a new task – “free and independent Macedonia”, which will unite the three parts, ie. Vardar, Aegean and Pirin Macedonia as “the second Bulgarian state in the Balkans”. In 1933 the new course of action becomes the doctrine of the organization. According to Mihajlov, the nation of the newly formed state, composed of “Macedonian Bulgarians”, can be defined as “Bulgarian-Macedonian”, because it would be Bulgarian in ethnocultural and linguistic sense, and Macedonian-in regional. Thus, VMRO creates an enemy in the face of the political elite in Bulgaria, which until that moment, for the most part, was in a positive mood towards the organization. As a result, after May 19, 1934, the political circle Zveno and the Military Alliance sent the Bulgarian army against the VMRO citadel in Petrich. In just a few days, the structures of the organization were disbanded, its leaders were interned, and in 1935 Mihajlov was sentenced to death.

Caught in a difficult situation unlike the other leaders in VMRO, Mihajlov managed to hide in the country for several months and in September 1934 to escape to neighboring Turkey. Macedonia-born Turkey’s new leader, Mustafa Kemal Ataturk, is giving Mihajlov political asylum, probably with the idea that southern Slavs could not establish hegemony in the Balkans in the form of an alliance between Yugoslavia and Bulgaria.

Immediately after Mihajlov’s escape to Turkey, VMRO managed to carry out its biggest terrorist attack – the assassination in Marseilles on October 9, 1934, in which Yugoslav King Alexander I Karadjordjevic and French Foreign Minister Louis Bartu were killed. The sending of VMRO’s assassin, Vlado Chernozemski, is the result of Mihajlov’s close co-operation with Ante Pavelic’s Croatian Ustashas against Yugoslavia. Pavelic is the initiator of the assassination plan and he realistically assesses the possibilities of his people, ie. weak and that is why he begs Mihajlov for help. After the nerves of the three Croatian assassins at the port of Marseille could not stand, Chernozemski successfully performed the task assigned by Mihajlov. Namely, the assassination in Marseilles will provoke the League of Nations to try through the Geneva Convention for the Prevention and Punishment of Terrorism to mobilize the international community to oppose organized terrorism and to include the fight against it in international law. 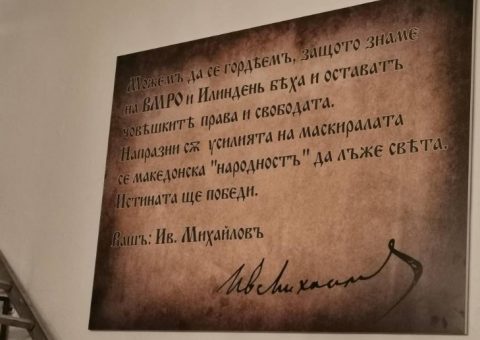 It should be noted that Mihajlov, who interrupted his law studies in Sofia, has no experience in the partisan struggle and has never entered the “interior” of Macedonia, or on the battlefield in the very south of Yugoslavia. He is trying to overcome that shortcoming, which negatively affected his position in the organization completely oriented towards the cult of heroism and martyrdom, by marrying a popular VMRO terrorist. In 1926 he married Mencha Karnicheva, who in 1924, on the personal order of Mihajlov, carried out the famous assassination of the Macedonian politician in exile, Todor Panica, at the Vienna Burgtheater, during the play “Peer Gynt” by Ibsen. Shortly after the verdict, an Austrian court acquitted Karnicheva for health reasons.

During the four-year exile in Turkey, Mihajlov and Karnicheva were first interned in northern Anatolia and then on the island of Buyuk Ada near Istanbul, trying unsuccessfully to obtain visas for the United States. There, within the Macedonian Political Organizations in the United States and Canada (MPO) based in Fort Wayne, Indiana, VMRO had a dense network of supporters. But even Switzerland, Romania and Britain, as well as Mussolini’s former VMRO’s ally Italy, do not want to receive the terrorist couple. It was only in 1938 that Poland allowed the two to enter its territory, but on the condition that they refrain from any kind of political activity. Mihajlov and his wife receive visas on the personal initiative of the Polish ambassador to Sofia, Adam Tarnowski, who during the First World War was the diplomatic representative of Austria-Hungary in the Bulgarian capital and maintains close ties with VMRO. Although Warsaw is canceling the visas amid violent protests in Belgrade, Turkish authorities are placing the Mihajlov family on the Polish merchant ship Levant, which was anchored in the port of Izmir. After a long odyssey across the Mediterranean on September 23, 1938, the ship with its unwanted passengers finally arrives in Gdynia.