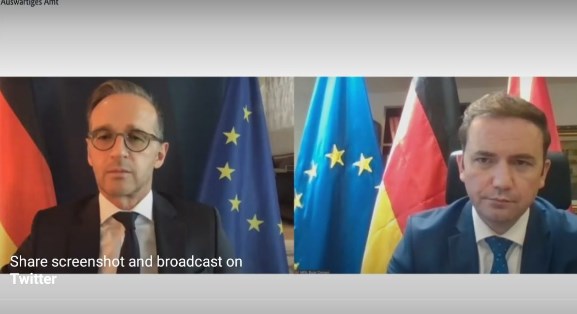 German Foreign Minister Heiko Maas said that he supports the opening of EU accession talks with Macedonia by the end of the year. In a video conference with Macedonian Foreign Minister Bujar Osmani, Maas said that the objections from Bulgaria are a billateral issue that is being resolved. Bulgaria demands concessions from Macedonia on issues of history and national identity before it would allow the opening of accession talks.

Maas told Osmani that issues such as the name and the Macedonian language are detailed negotiations that need to take place, and should be resolved bilaterally between Macedonia and Bulgaria. Maas again praised the Prespa treaty with Greece under which Macedonia was forced to change its name, but which did not fully remove the objections from EU member states for the opening of accession talks – with Bulgaria continuing the Greek policy of demanding concessions from Macedonia. Germany chairs the European Council and is also the main instigator of the Berlin process round of meetings, which Macedonia and Bulgaria will jointly chair in early November in Sofia.

Osmani: DUI is open to forming a coalition with either of the major parties