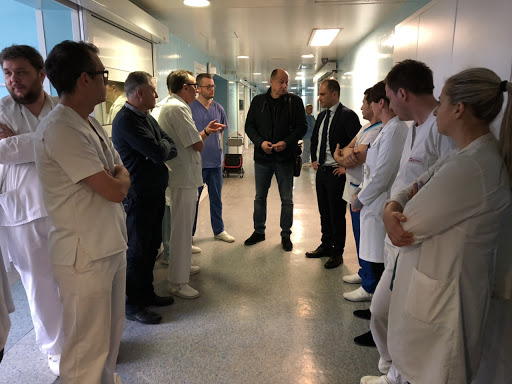 I would like to use today’s press conference for several views related to the draft law on protection of the population from infectious diseases, which the MPs had the opportunity to receive for the first time yesterday. We thought that one day at least one day was needed to at least read that draft law, Antonio Milososki from VMRO-DPMNE on Wednesday.

From what we can see from the draft law, we see that this law does not have specific measures to combat the pandemic, in this law there is no measure to strengthen the capacity of institutions that perform COVID tests, there is no measure for cheaper testing of at-risk populations as retirees or the chronically ill, nor is there a measure for wider testing in terms of numbers in higher- risk municipalities such as Skopje, Prilep, Strumica, Tetovo and other cities. Therefore, we believe that this law is a more technical amendment instead of a law that would contain essential measures to combat and deal with the pandemic. I must mention that at this level of threat from the pandemic where Macedonia unfortunately has one of the highest mortality rates per million inhabitants in Europe came as a result of inadequate measures and the lack of people’s trust in the Commission of the Minister of Health, he said.

He adds that yesterday in the morning there was a meeting of a representative of VMRO-DPMNE with the Minister of Health regarding the draft law on protection against infectious diseases and the idea of VMRO-DPMNE to establish a special state commission for protecting and combating pandemics and epidemics as the situation or in the future if they occur again.

To our disappointment, this idea and proposal were not accepted by the Minister of Health. It is obvious that the Minister of Health, unlike the majority in the public, still has close trust in his coronavirus advisory Commission headed by Dr. Karadzovski, for which we consider the Commission to be partly responsible for very untimely or very inappropriate measures taken in the past five months. That is why we believe that Macedonia must react more seriously, someone must take responsibility for the current situation and more skilled people to replace those members of the Commission who went to Vlado Georgiev’s concert. Such a health worker and a member of the Commission cannot instill confidence in the population and impose measures that he himself does not respect, Milososki said.