After strong criticism from the citizens of Ohrid for the failure to put out a large forest fire on Mt. Galicica, Stojance Angelov, the head of the Crisis management center, responded that there is not much he can do since the mountain is heavily mined. Galicica was the site of fierce fighting in the First World War, and much of the unused ordnance remains strewn along the mountain.

There are many mines, grenades, bullets and other explosive devices. Every time there is a fire there, people hear detonations and bullets being fired. These devices won’t explode if you step on them, they are more than 100 years old, but they are being activated from the fire, Angelov said. 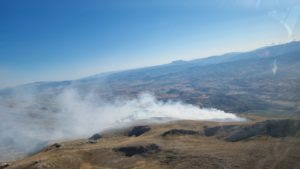 He insisted that the fire does not pose a threat for any settlement and practically said that it will be left to burn out on its own. The fire is raging for over a week now, and illuminates the sky over Ohrid every night.