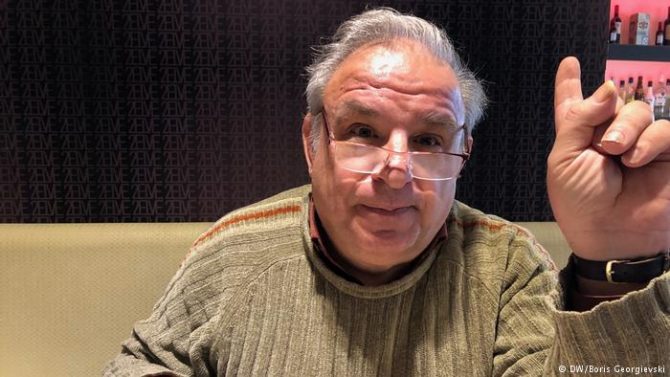 Under the Prespa agreement, Macedonia was forced to accept the creation of an expert commission which will have the right to go through Macedonian history books and school books to look for evidence of “irredentism” or “historic falsehoods”, and the agreement even provides for the policing of public discourse to look for examples of “incitement of hostility or hatred”.
Now, in an interview with Deutsche Welle, Greek professor Spyridon Sfetas, who is a member of this expert commission, is revealed as a rabid nationalist who believes that “Marshall Tito made up the name Macedonia” and that the Macedonians are an “amorphous mass with a fluid character”.

We do not recognize the existence of a Macedonian nation. The agreement regulates your citizenship and not national background. The Prespa agreement benefits Greece. We are not asked to do anything, Sfetas said in the interview.

In theory, Macedonian historians will have the same right as the Greek committee members to demand changes in Greek history books and Macedonia will be able to ask Greece to take actions in cases of hostile comments by individuals. But, given that the implementation of the agreement depends on Greece withholding its right to veto Macedonia’s EU membership, it’s clear that Greece will have the upper hand. In the similar commission formed a year ago with Bulgaria, Macedonian members have made no demands from the Bulgarian side, while the Bulgarian ones have come up with numerous initiatives for changes to Macedonian school books. The comment from Sfetas also indicates that all obligations under the agreement will fall to the Macedonian side.

The Greek professor announces that the agreement will include changes in the national origin or the “amorphous mass” of population living north of Greece. He insists that the Macedonians are Slavic settlers to the Balkans and that it is ridiculous to think that they identified as Macedonians. According to Sfetas, the name was “made up by Tito, to create a basis to annex the Greek part of Macedonia”.

The Communists were the main proponents of the creation of a Macedonian nation and Macedonia is the result of Serbo-Bulgarian antagonism, he adds.

The nationalist professor says Greek historians will now have to define the character of the people living in Macedonia, the history of the region and the key points of the Macedonian national character. Sfetas is one of the six Greek historians in the committee, who will work with six historians from Macedonia.

As the latest EU deadline draws near, new meeting of the Macedonian – Bulgarian historic committee