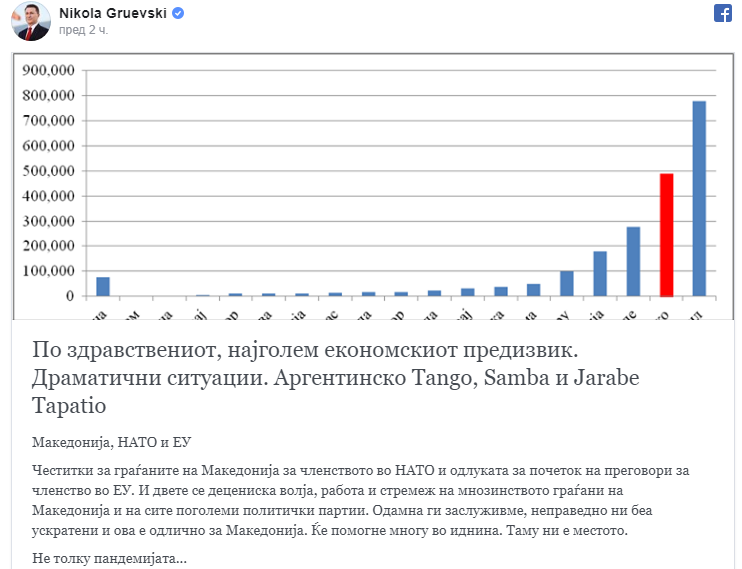 Former Prime Minister and VMRO leader Nikola Gruevski condemned the idea put forward by SDSM party leader Zoran Zaev to dramatically cut public sector wages in an attempt to plug the growing hole in the budget. Gruevski reminded the public that he steered Macedonia through various crises but never proposed measures that would cut into wages, retirement incomes, farming subsidies and welfare payments.

On the contrary, in some crisis years we would keep the promise to hike wages, with some months of delay. And we never allowed the prices or the value of the denar to become destabilized. I have no direct insight in the budget and the Central Bank data, other than the publicly available reports, but I believe that cutting the most basic income of the citizens should always be the last option for a country that already has low living standards, Gruevski writes.

He points to other options and ways to redraw the budget, tapping available lending sources and cutting red tape as ways to reduce the budget deficit that is growing because of the coronavirus caused lockdown.

And even if we were forced to make this move, to reduce wages, the proposed cut is way too big. Reducing the public administration to the minimum wage, even for two months, seems to be the advice of someone who sees the economy only through numbers and not through the prism of real lives, and neglects the damage this would do to the consumer spending, which is in freefall as it is, Gruevski adds.

Zaev estimated the hole in the budget to over two billion EUR, given that both economic activiity and sales are sharply declining.

In his message through Facebook, Gruevski also congratulated to the whole of Macedonia on the successful completion of its NATO accession process and the promised opening of EU accession talks.

Not so much due to the pandemic, but due to the way in which the final obstacle on that path that was created by some of our neighbors was resolved left us with a bitter taste, and many of our citizens accepted the news with mixed feelings instead of with joy and celebration. But that’s an issue I’ve written about a lot in the past. These good news come at a time when we are rightfully primarily concerned with the lives and health of our citizens, Gruevski says, urging for mass testing for the virus and for urgent steps to avoid a Great Depression style collapse.