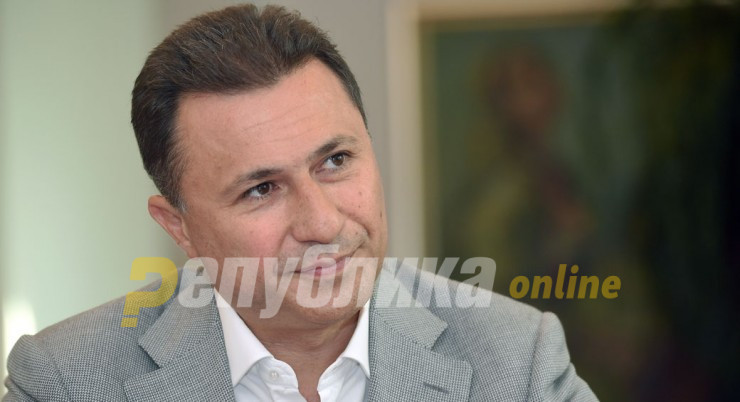 At a hearing in the Skopje court, in one of the numerous politically motivated cases the Zaev regime initiated against the opposition VMRO-DPMNE party, officials close to former VMRO leader Nikola Gruevski today testified against allegations of irregular party financing and purchasing land with party donations.

The testimony that caused most public interest came from Gruevski’s former chief of staff Martin Protoger. Protoger clamed that Gruevski told him that he purchased a plot of land of 10,000 square meters in Skopje’s hillside Vodno district, but couched this claim with numerous caveats, saying that Gruevski mentioned this only once and never again, and that Gruevski was considering moving to a much cheaper hillside region to escape air pollution due to his persistent respiratory issues.

Gruevski, who received political asylum in Hungary, responded to this testimony by noting that the prosecution does not have a shred of material evidence that he instructed businessman to purchase land on his behalf, and is relying on blackmailed witnesses. Gruevski notes that Protoger, like all high level VMRO officials from the previous party leadership, has faces years of persecution and is likely under pressure to give the prosecutors something, anything that could alleviate his position.

Even in this position, the allegation is couched with caveats that do not cause me too much harm in the case against me, while still containing elements that he may hope will satisfy the prosecutors, who are dangling a sword over his head. Protoger confirmed that I had persistent respiratory issues, which is widely known in the public, and that I was considering moving to Sopiste, not to Vodno. He then claims that sometime in 2010 or 2011 I mentioned to him about looking into 10,000 square meters in Vodno, but also that the deal didn’t go through since I continued to discuss looking for land in Sopiste. Over the years I have heard numerous unconfirmed reports, which are devastating for Protoger as a person, that he panicked and tried to ingratiate himself to Zaev and to the prosecutors, raising different, often undignified initiatives with them that would dishonestly harm me, in an attempt to gain a better position for himself among our common persecutors. It saddens me if it is true, Gruevski writes in his response.

In another testimony, former Interior Minister Gordana Jankuloska, who is serving out a prison sentence of four years for a different politically motivated case, testified that she handled party finances between 2004 and 2006 as Secretary General of the party. She said that the party had minimum donations and funded its operations from money provided from the state budget, under the public party financing laws. Jankuloska said that on several occasions, the donors would leave the money with Gruevski, who would hand it over to her when she would come to the office, and also that she thinks that Gruevski had a safe in his office.

It’s interesting that the media affiliated with the Government jumped on this claim, in evident lack of any serious allegations. I did not have a safe in my office, but even if I did, I do not see a problem with that. The manager of every company has a safe. I had a desk where I kept my documents, Gruevski added, noting that Jankuloska’s testimony was entirely correct.

In a social media post, Gruevski adds that the hearing held today is another attempt by the Zaev regime to distract the public from the enormous actual crimes carried out by its officials.

They believe that if they discredit me, the people will believe them and begin to support them. It won’t happen. We are talking about an incompetent criminal gang that is abusing its political power for persecution of its opponents, while being engaged in huge crimes with unforeseeable consequences. That is why they are collapsing. Because of their dishonesty, their treason of our national interests, their crime, corruption, lack of work and lying. This, in summary, will be the cause of their fall from power, Gruevski adds.