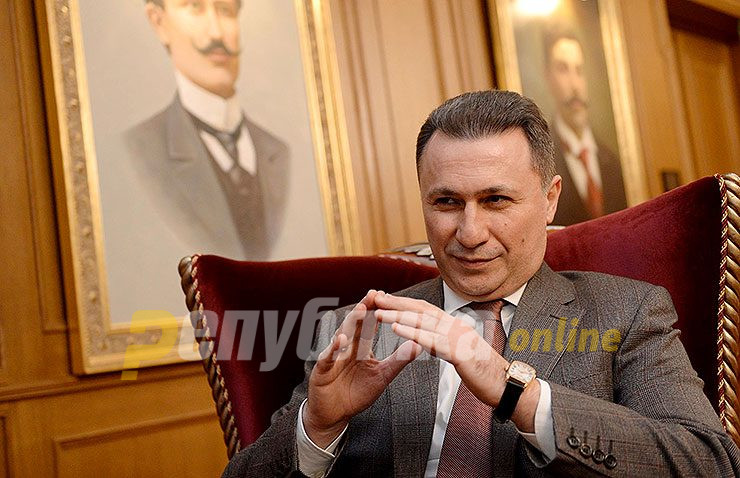 Regarding Greek Prime Minister Alexis Tsipras’ statement for the Financial Times, in which he points out that I as Prime Minister was unwilling to talk about finding a solution to the issue that Greece immediately opened after independence was declared regarding our constitutional name, I would like to point out that in fact Tsipras has never offered such talks that I have refused.

Before he assumed the prime minister’s post, I held intense talks with Mr. Papandreou with whom we had 10 personal meetings on this issue, but unfortunately due to the well-known Greek positions or red lines as they called them, we did not reach a solution, which would later be proposed to the citizens in a referendum. The end of my mandate and the beginning of Tsipras’ mandate coincided with only a year, from the beginning of 2015 to the beginning of 2016.

In that conversation, I proposed him, not he to me, to meet and talk about finding a solution to the issue that caused Greece to block our Euro-Atlantic integration, pointing out that he can choose the time and place for the meeting. His response was, formally speaking, positive and said that he would call me to discuss this issue as soon as he can. He never called back.

The first, because in 2015 Greece was in deep economic and financial crisis, and its top priority was to deal with that crisis that began in turmoil in 2008. All the prime ministers and leaders of the EU countries and wider had an understanding for its lack of focus and lack of interest in finding a solution with us at such a time because they and their banks gave priority to the financial crisis in Greece. Moreover, the political atmosphere in Greece in that year filled with daily mass protests and demonstrations, some of them with 250,000 citizens in front of the parliament building, motivated by the catastrophic trends in the economy and the standard of living, did not leave hope that he had time and political space to solve other major issues. In that year after being appointed in February, there was a referendum in July, loss of the majority in August and elections in September, raising taxes, reducing salaries and pensions, receiving assistance packages worth hundreds of billions of euros, dealing with the IMF, the ECB and the EC on those issued and the whole world’s eyes were directed at them because of the financial crisis that was reflected in the rest of the world. Tsipras ran between Moscow, Berlin and Washington to seek a solution to the financial collapse, receiving congratulations from Fidel Castro for the victory of the big Oxi in a referendum that was shortly afterwards forced to leave, he cope with daily strikes by farmers, trade unions and people in general, and at one point all banks in Greece had to stop working.

When the same year at a meeting with the President of the European Council Van Rompuy in Brussels, I asked for greater engagement from the Union and he personally to put pressure on Greece to resolve the dispute with us and to unblock our strategic integration, after silence and thinking from for a few moments he sincerely responded to me like this: “if a senior politician in the world, during this period promised you to push for this request, know that he is not honest with you. Because our key priority is how to stabilize the financial crisis in Greece and begin to repay their debts to us. And if there is the least amount of pressure in this period, believe that it will be used in the direction of financial stabilization measures, not on this issue. You have two choices: either accept all Greek terms and requirements and so get out of the problem or wait.”

The second reason why Tsipras does not respond to my call to discuss the issue that has blocked us is because in the beginning of 2015 political crisis began in Macedonia and a transparent operation in an attempt to change the government for the change of the name, and Tsipras quite logically decided that it is better to wait for the crisis to end and eventual success in the planned goal of that operation, which for his country would mean, as it did later happen, the arrival of a new government in Macedonia that will have given consent in advance that if it is installed it will accept the Greek positions and thus with a seeming and decisive compromise and negotiations the question will be completely closed in Greek benefit. He simply estimated that if he waited, he could have a far better interlocutor who was prepared to make far greater concessions over national issues, the name, the identity, the history …

The second interaction between me and Mr. Tsipras was brief and informal during President Obama’s reception in New York on the occasion of holding the General Assembly of the United Nations, when briefly and informally in a cocktail atmosphere we talked for a few minutes with Mr. Tsipras and that conversation in the part of the name issue was similar to the first one, in the sense that he agrees that the issue should be resolved and that he will call to talk. Actually, they were buying some time and waited for other negotiators on the Macedonian side who were more suitable for them.

Accordingly, Greece has never had a problem for meetings and talks on my part, on the contrary, we encouraged them because we wanted to find a compromise that would unblock our EU and NATO integration process.

What was a real problem is that we did not want to accept an agreement with so many concessions on the national interests that Greece demanded and conditioned us with.

In fact, Mr. Tsipras himself in the same interview for the Financial Times clearly and sincerely says that the issue was not only about the name but also about identity and history.

Unfortunately, not only the intentions but also the public appearances of the SDSM government after its installation in May 2017, were not aimed at building good positions of the state for negotiations. It was then, in mid-2016, that Greece declared the end of the financial crisis and came in a situation where it could pay its debts, and with that came the time when wider international pressure on them on this issue could be considered.

The new Macedonian government, instead of using this new situation, in the first days of office its leaders publicly in the media stated that I quote: “at all costs”, they had to solve this issue, and they publicly gave time frames between 6 months and one year. Whoever was in the place of Mr. Tsipras would request concessions in such a circumstance that the interlocutor had not previously planned or expected to receive, because the other side, the Macedonian side, clearly stated, “at all costs”.

When a person speaks publicly before the negotiations begin that he wants to get something at all costs, and the next day they go to negotiate, then it is normal the price of what he wants to achieve, unblocking in this case, increases and it is normal for the other party to accept and pay.

Mr. Tsipras, in the short and medium term, has great reason to be happy and satisfied with this Prespa agreement. From a long-term perspective, if he matters at all, there is only one weakness, they got too much as a nation, and we as a nation have lost too much with the content and the concessions in this agreement.

At such extremes, historically, the other side that is so strongly blackmailed, defeated and humiliated, after some time, when some circumstances change, however long it may be, there is a strong urge and need in one way or another to recover what it had lost.

Therefore, for a lasting solution in such decade-long disputes, a solution with long-term sustainability is better for both sides if a reasonable compromise is reached, a more fair compromise, rather than a “hand bending”.

So that the deal and the compromise last forever.

When you get everything, the heat in those who lost everything continues to burn and you are never sure when that heat flares up again and the issue reopens and the problem returns to the table.

I have worked hard to reach a sustainable and much fairer solution with which both sides can live forever, be close and respect each other.

The decades ahead of us will show who was right.