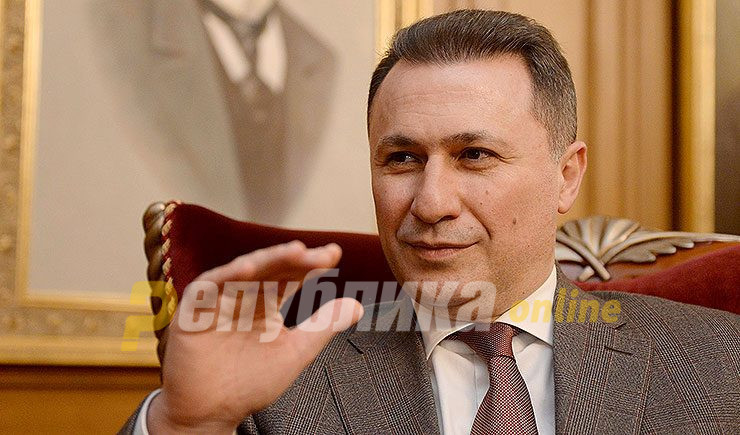 Macedonia resembles a village with no guard dogs, and it’s natural that this will encourage propaganda from other countries, said former Prime Minister and VMRO leader Nikola Gruevski, in his remarks regarding the latest dispute with Bulgaria. Tensions have risen between Macedonia and Bulgaria after the larger country announced it will block Macedonia from opening EU accession talks unless Macedonian historians agree to declare legendary VMRO leader Goce Delcev to have been a Bulgarian. Gruevski published his comments on May 4, the anniversary of Delcev’s death in 1903.

Goce Delcev is as current today as he was in his day, not as much because of the attempts by our eastern neighbor to claim him and the entirety of Macedonia’s contemporary history until 1944 as its own, but for the incredible intrusion of foreign propaganda that the Macedonia authorities allowed into the country with the treaty signed with Bulgaria. Anyone who read his history can easily notice similarities from the nationalist Balkan propagandas in the 19th and 20th century aimed at Macedonia (from Greece, Serbia, Bulgaria and others) and what is being done now on the part of our neighbors, seriously assisted by domestic collaborators, Gruevski, who was the leading opponent of Zoran Zaev’s series of concessions to neighboring countries and a major proponent of having an sovereignist Macedonian policy, wrote from his political exile in Budapest.

Nikola Gruevski writes that Greece seemingly finished her job in Macedonia and achieved its goals, but that now Bulgaria launches its own campaign that is in full swing. “And seeing how easy it is, with resistance restricted to individuals, and no organized response, Bulgaria is pushing to get more out of this opportunity while Macedonia resembles the time under occupation, with no state, institutions or allies”. Gruevski warns that, while Bulgaria currently demands concessions with regard to the Macedonian language and history, it won’t stop there.

If you think it ends there, you’re naive or misinformed. Even top level officials from our eastern neighbor are coming open with their demands. One of them observes that the day is not far when we will be together again, and that “where waters flowed, they will flow again”, Gruevski writes citing a recent statement from Bulgarian Defense Minister Krasimir Karakacanov.

Days after predicting the unification of Macedonia and Bulgaria, Karakacanov calls for a joint monument to Goce Delcev in Greece

Karakacanov praised comments from a former Yugoslavist Macedonian politician Denko Maleski, who accepted Bulgaria’s positions, and then strongly condemned Gruevski for his opposition to this process of national unification.

I have the impression that politicians in Bulgaria are eager to pursue these ideas to win more nationalist votes, but also to accomplish their goal, as they see Macedonia as weakened, unprotected, with a Government that is quick to make concessions, and they are far better placed being an EU member state. I find very logical the observations that Bulgaria acts this way only toward us, but not toward Greece, which also holds part of the geographic region of Macedonia. They have no activities or pretensions there. They don’t even push against Serbia, which holds their so-called Western provinces. Bulgaria doesn’t claim minority rights for Bulgarians in Serbia, aren’t Dimitrovgrad, Bosilegrad also part of the San-Stefano Bulgaria (Greater Bulgaria)? Why don’t Bulgarian historians pressure Serbia? It’s simple, they found Macedonia as a village with no guard dogs and they are pushing against us, Gruevski writes.