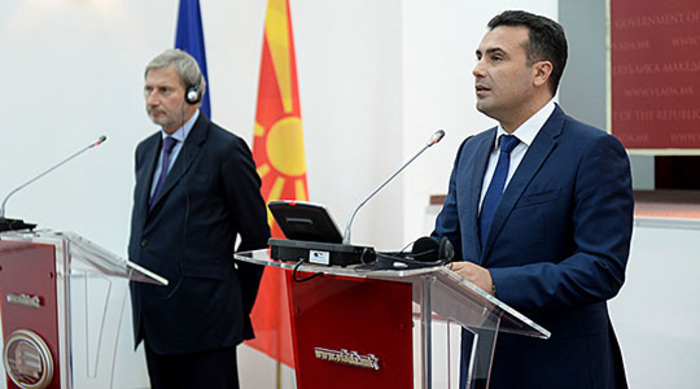 European Commissioner Johannes Hahn called on Prime Minsiter Zoran Zaev and other political leaders to ensure accountability for all wrongdoing and to guarantee the independence of the judiciary in light of what he called “the latest developments”. Hahn, and acting US Assistant Secretary of State Philip Reeker are in Macedonia today as the country is gripped by the major corruption and abuse of office scandal that was caused by Special Prosecutor Katica Janeva – the person that was until recently touted by the EU and the US as the best example of independence in the judiciary, and the main condition named for Macedonia to be able to open EU accession talks in October was said to be the request that Janeva’s office is made permanent.

I have to say that I really regret that EU member states did not decide on opening accession negotiations in June because you have achieved and delivered actually on everything that was agreed but of course we have to respect their decision and to work to finally have the decision come into force indeed in October. So I’m confident that this decision will be taken in October. Macedonia worked hard for it and now it’s time for EU leaders to do so as well. It’s necessary to continue to implement the necessary reform measures. I came to Skopje to discuss reforms especially in the rule of law, including independence of the judiciary and the need of accountability. I would like to underline this especially with you over the latest developments. All political forces need to focus on the strategic goal, Hahn said during a joint press statement with Zaev.

Janeva, but also unnamed high ranking officials of Zaev’s SDSM party are suspected of abusing office and extorting millions from businessmen who were on the receiving end of Janeva’s charges.

Hahn said that Macedonia must show zero tolerance toward corruption and to prove that no-one will be amnestied from corruption allegations. He also called on the opposition VMRO-DPMNE party to help come up with a law on state prosecutors. Following Janeva’s resignation, Zaev unilaterally proposed a law and nominated another loyalist, Vilma Ruskoska, to take Janeva’s place, a proposal which was immediately rejected by VMRO.

Speaking next to Hahn, Zaev insisted that nobody will be protected from the investigation, which is so far reduced only two associates of Janeva, Bojan Jovanovski – Boki 13 and Zoran Mileski – Zoki Kicheec.

The message is that nobody will be privileged and amnestied. I give encouragement that the investigation continues no matter who it leads to, Zaev said.

He insisted that the text of the law he proposed, after talks with VMRO broke down, is actually a compromise solution and expressed hope that the law will be adopted by the end of July. Hahn is expected to meet VMRO leader Hristijan Mickoski later in the day.