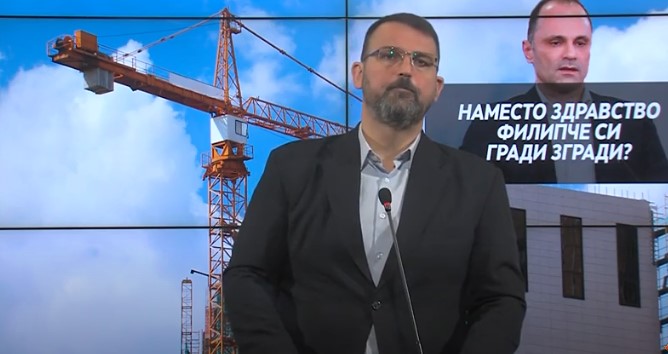 On top of the large residential construction on Skopje’s Mt. Vodno, Healthcare Minister Venko Filipce also built a residential building in near-by Kozle, revealed VMRO-DPMNE spokesman Naum Stoilkovski. The opposition party demands an answer from the Minister how is he able to afford the ever growing real-estate portfolio, at a time when he should be focusing on the coronavirus epidemic.

Previous real-estate developments by Filipce were done in partnership with a businessman who is a major contractor of the Healthcare Ministry, a clinic director and his wife’s family. This latest deal, Stoilkovski said, is done in cooperation with a doctor from the pharmacology institute. Doctor Emilija Atanasovska and Filipce jointly developed Atanasovska’s house in Kozle, part of the city popular with diplomats and upper class residents, and built a 570 square meters building.

Minister Filipce had Atanasovska conduct the entire legal and municipal procedure over the development, in an attempt to conceal his involvement. Filipce devastated our healthcare and spent his term in office handing procurement contracts to business partners and buying real-estate on Vodno, Stoilkovski said.