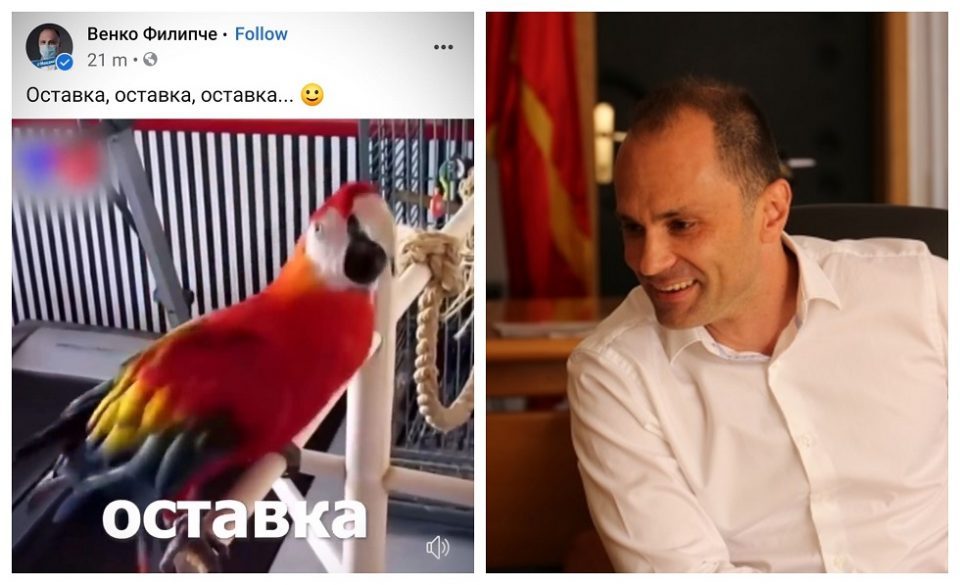 On Monday evening, as Macedonia registered record 21 Covid-19 deaths, Healthcare Minister Venko Filipce thought it’s a good time to tweet out a bizarre, deeply politicized video. It tries to lay the blame for the epidemic on opposition officials, posting several instances when they were not wearing masks, intermingled with mocking images of Jim Carrey, Bubbles from Trailer Park Boys and parrots.

After public outrage, Filipce deleted the video, then posted it again before finally deleting it. It was preserved by other Twitter users. Because of its tone, it’s not certain whether some of the SDSM party Twitter administrators made a mistake and posted the video from a wrong account, or if they really thought it is in good form for Filipce to act this way, as the epidemic is spiraling out of control.

Filipce has been facing strong criticism from the opposition VMRO-DPMNE party, which has pointed out to the numerous corruption and racketeering scandals revolving around him and his open politization of the crisis – SDSM was portraying the epidemic as over in June, when the party desperately wanted to hold low turnout elections, only to see it explode in the coming months. Recently, Filipce showed that he can’t handle the criticism and despite his highly responsible office, he entered into the political fray, first by sharing a picture of VMRO-DPMNE supporters without masks, and then accusing opposition representatives for not wearing masks in Parliament – even as he himself was not wearing one. The fact that many SDSM officials and activists were also violating the mask mandate was never raised by Filipce.

SDSM also used the police and inspection services to go after opposition leader Hristijan Mickoski, presenting a video of him exercising before the epidemic as violation of the mask mandate (scenes from this video were used in the one Filipce tweeted out yesterday) and sending the police to raid a restaurant where he was having lunch weeks before the July 15 “corona election” – all in an attempt to present the opposition as uniquely violating the mask mandate.

Dozens of Twitter users flooded the replies of the video before it was deleted, clearly signaling to Filipce that he is out of line. Some of the usual SDSM detractors tried to blame the video on his recently hired PR manager in the Ministry, although its tone seemed more like something that would come out of the party’s propaganda team.