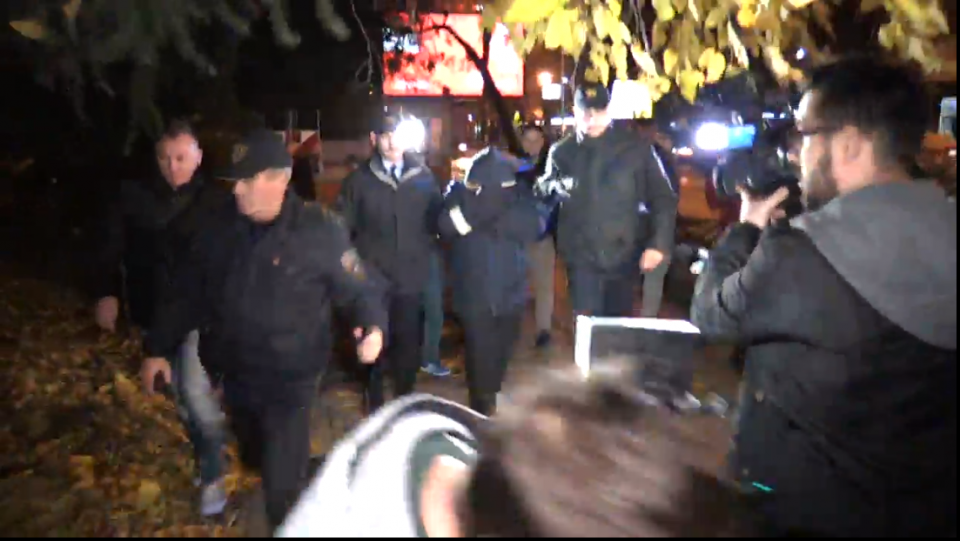 Disgraced former Special Prosecutor Katica Janeva was escorted to her home from the Sutka prison this afternoon. Janeva was wrapped up in a large jacket to obscure herself from the TV cameras as she was taken into a police vehicle.

The Appeals Court approved her request to have the detention order commuted into house arrest. She was released without being required to post bail, although she initially offered her substantial property as a guarantee. The house arrest was set to an apartment in downtown Skopje, owned by her son Lazar, who was himself suspected of being heavily involved in his mother’s extortion attempts.

Janeva is charged with being a major part of a group that extorted millions from businessmen she prosecuted. Her ninja like transfer also raised a number of conspiracy theories, given the lack of eyewitness accounts while she was detained. Janeva allegedly had a roommate, who remained miraculously silent despite Janeva’s high profile, no pictures of her surfaced even as the press pushed strongly to get the scoop and the transfer during which she was unrecognizable added to the mystery.

VMRO-DPMNE condemned the decision, given the wealth of evidence against Janeva, which allegedly included rap video style photographs with the extorted money, and the shocking way in which she betrayed public trust and trust in the judiciary overall.

If it weren’t tragic, it would be funny. The way this case is being conducted is the best proof that our judiciary is ran by partisan loyalists such as prosecutor Vilma Ruskoska and judge Dobrila Kacarska. Initially they denied there even is a crime here, but under the weight of the facts he was forced to accept the opening of an investigation, even as he was trying to protect Katica Janeva till the last minute, VMRO-DPMNE said in its press release, pointing to the many violations of the procedure during the investigation.

The opposition party insists that Zaev is the head of the criminal octopus where Janeva is just a tentacle, and says that following Zaev’s electoral defeat next year, the entire group will be held accountable.