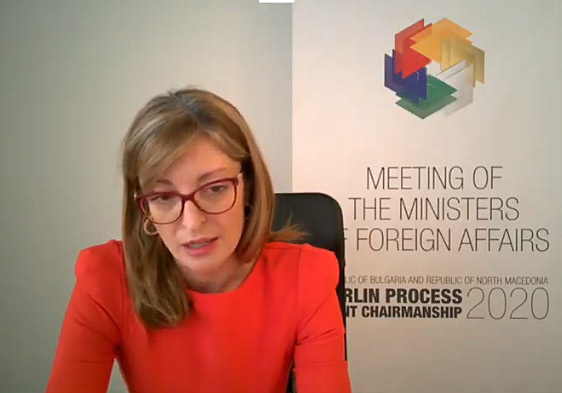 Bulgarian Foreign Minister Ekaterina Zaharieva says that the biggest problem in relations with Macedonia is the insufficient guarantees for the implementation of the Good Neighborhood Agreement, reports Deutsche Welle.

In an interview with the German public service broadcaster ARD in early December, published yesterday, Zaharieva said that Sofia would not give the green light to start accession talks until those guarantees became part of the Negotiating Framework. Part of them should be the recognition of the “historical truth”, as formulated by Zaharieva, while alluding to the fact that “totalitarian methods” still prevail in the state policy of Macedonia.

Bulgaria wants the historical truth to be recognized. That was not a problem for Macedonia when the Agreement was signed – that common past that should connect us, not divide us. We do not say: These heroes are only ours. We say: They are common heroes. It is a modern thinking of two countries, especially if they want to be together in the EU. One cannot be publicly lynched in Macedonia every time they say that one of these heroes was a Bulgarian. 30 years after the fall of totalitarian regimes, totalitarian methods and approaches must not be state policy, Zaharieva told ARD.

The second remark made by Zaharieva refers to the history textbooks in Macedonia.

In textbooks in Macedonia, Bulgarians are still portrayed as fascists. How would you feel if, 75 years after the war, someone still presented you as a fascist? she told the German journalist.

Further in the conversation, the Bulgarian Minister twice explained the need to include Bulgarian demands in the Negotiating Framework, although this was rejected by the current holder of the EU;s Presidency, Germany.

According to her, this will not set a precedent in the EU because, as she claims, bilateral conditions were included in the Negotiating Framework for Croatia.