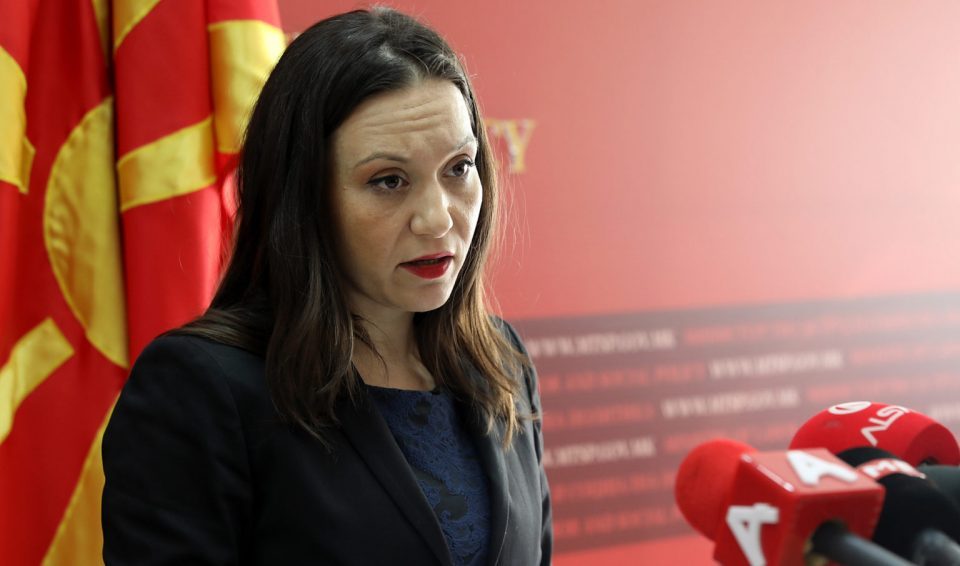 With a late night vote, held way past midnight, the ruling SDSM party removed interim Labour and Welfare Minister Rasela Mizrahi from her position. Mizrahi was removed after she defiantly refused to use the imposed name “North Macedonia” during official events.

I am a proud Jewish woman from Macedonia, Mizrahi told the ruling party from the Parliament pulpit, during a debate that had many ugly moments and attacks at her. The first Jewish member of Government in Macedonia faced an unending torrent of anti-Semitic abuse from the left during her term in office, and her removal puts in doubt the overall conduct of the elections.

Mizrahi was nominated to her position by the VMRO-DPMNE party, which under the 100 days rule has the right to select the heads of several key Government departments to make sure the public administration, the police and the welfare transfers are not abused by the ruling SDSM party for political purposes. SDSM tried to obstruct other VMRO appointments, but nothing came close the vitriol that was aimed at Mizrahi, who replaced SDSM’s far left darling Mila Carovska from the Labour and Welfare Ministry. She was told to wear the star of David by one of Carovska’s assistants in the Ministry while SDSM activists taunted her with Holocaust themed slurs. The Mizrahi family, a Sephardic family that has been prominent in Macedonia for centuries, was almost entirely wiped out in the Holocaust. The final vote was 62 in favor and 26 against her removal.

Even before I walked into my office, as the first Jewish person in the history of Macedonia to be appointed to the Government, I was the target of reckless anti-Semitic attacks. Instead of criticizing my work, I was attacked for my religion and nationality and labeled with a yellow star, Mizrahi said in her remarks.

SDSM used a press conference where Mizrahi spoke in front of a banner with the name Republic of Macedonia as an excuse to demand her removal. Foreign Minister Nikola Dimitrov claimed that Greece sent out a verbal note demanding that Mizrahi is removed for not using the imposed name “North Macedonia”. Mizrahi replied that the banner was left over by Carovska and that she has no intention of putting up a new one. Her removal comes at a time when top SDSM party officials are also dropping the use of hated adjective, a move clearly linked with the coming elections, and interim Prime Minister Oliver Spasovski who asked for her removal, used Macedonia, without the adjective, during his remarks in which he demanded that Mizrahi is voted out.

As the elections draw closer, SDSM officials begin to drop the adjective “North”

The Foreign Affairs Ministry is hiding four other diplomatic notes from Greece. Foreign Minister Dimitrov still hasn’t changed the official name of his own Ministry, but he demands the removal of Rasela Mizrahi. You’re acting tough on a 5 foor four woman but you rally behind Dimitrov. Mizrahi showed to many SDSM members and officials how one loves her country. The mandate of this Government is nothing more than preparing the elections, not removing ministers. Did the banner obstruct the elections? No, your issue with Mizrahi is in that she uncovered the abuses done by Mila Carovska, said VMRO-DPMNE member of Parliament Antonio Milososki.

The debate quickly descended into an ugly brawl. Xhevat Ademi from the DUI party said that “a patriotic party like VMRO-DPMNE is reduced to having a non-Macedonian – a Jew – defend the Macedonian national identity”, Ademi said, causing outrage in the opposition ranks as he was lauding himself for his guerrilla actions. Ilija Dimovski from VMRO-DPMNE responded to Ademi that he and the other “guerrilla commanders” are now pushed around by the Boki 13 racketeering gang and the head of the Albanian wing in SDSM Muhamed Zekiri.

Dimovski pointed out to the article in the Prespa treaty that links the use of the imposed name “North Macedonia” with the opening of EU accession talks and their separate chapters. Macedonia was denied the date open EU accession talks in October which throws the implementation of the Prespa treaty into question. “Mizrahi did not violate the Prespa treaty, Spasovski violates it, in favor of Greece. The chapter of labour and welfare of our EU accession talks has not been opened yet. Once it is, then the treaty states that we need to begin using the ‘new name’. The chapter on interior affairs is also not open, but under Spasovski the Interior Ministry began issuing documents with the ‘new name'”, Dimovski said.

Mizrahi accused her predecessor Carovska of leaving her a huge backlog of unresolved cases of welfare claims, and said that it was her work to speed up the process that really upset the ruling SDSM party. Additionally, Mizrahi said, Carovska abused her position to intrude on the independence of labour unions. On the historic issues, she named a list of Jewish and other fighters in World War Two, and in prior fights for a free Macedonia.

The future of the Republic of Macedonia is based on her history. There is no future without a history. The fact is that, in their quest for a new future, this majority in Parliament forgot about its history, Mizrahi said.

Mizrahi: We are in a plane without a pilot, we need a broad Government now